Zsa Zsa arrives in the show's setting of Albert Square, jumping the barriers at the tube station. She sees Whitney Dean selling t-shirts and makes up a story about her boyfriend dying in a car crash in order to distract Whitney so she can shoplift. She then heads to the café where she overhears Lauren Branning breaking up with Peter Beale, and she talks to Peter outside. Peter's sister Lucy decides to hold a party at 89B George Street, and Peter invites Zsa Zsa. Zsa Zsa asks Peter who lives there, and he says nobody does. They dance together and end up kissing. Lauren walks in and slaps Peter and Zsa Zsa, who fights with Lauren. Whitney intervenes, but ends up getting in the fight herself, and Zsa Zsa ends up with a cut on her forehead. When Lucy orders her out, Zsa Zsa throws punch over Lauren, Lucy and Whitney. Outside, she asks Peter if he knows Shirley Carter, saying they go back a long way. Zsa Zsa visits Shirley and they talk. She is about to explain her reasons for being there when Phil Mitchell comes in, and Shirley asks her to leave. Outside, Peter is waiting for Zsa Zsa. She goes to the bus stop and Peter wonders if he will see her again. She walks over to him and kisses him passionately, and says "maybe", taking his keys without him knowing.

Zsa Zsa's story continues in EastEnders: E20, where she runs from her stepfather, Andy. He assumes she is in 89B George Street, where Shirley used to live, and dumps her bags outside. When he sees her, he runs after her but she is rescued by Leon Small. She runs off again and Leon, along with Fatboy and Mercy Olubunmi, finds her and she picks up her bags. Andy's car appears and they run into the flat with Peter's key. Andy leaves and they decide to stay in the flat. It is revealed that Zsa Zsa's father is dead and her mother Tina Carter has gone to Spain with a man named Miguel. She and Leon grow close, leading to them having sex in a cemetery. Fatboy tells Zsa Zsa that Leon is the father of Mercy's unborn baby, though it is untrue, and Zsa Zsa starts throwing everyone's belongings out of the window. Mercy suffers a miscarriage and Zsa Zsa freaks out and decides to leave. Leon stops her, saying he has feelings for her. He invites her to his boxing match, saying if she is there, he will know how she really feels. She turns up too late and misses the match, but when they meet up they kiss. Knowing they can no longer stay in the flat, Fatboy offers them a room at his house.

Several weeks later, she runs away from Fatboy's house without warning, returning to Walford and spending the night at Shirley's flat. Leon and Fatboy track her down and she apologises for disappearing. Shirley decides to let her stay with her for a while, and attempts to get Zsa Zsa into a local school. This fails, so she asks Phil for a favour, and he speaks to the headmaster Mr Allcock. Shirley tells Zsa Zsa she has an appointment with Mr Allcock but she is not interested until she sees him and takes a liking to him. She befriends Whitney and gives her relationship advice. Mr Allcock visits and Zsa Zsa flirts with him, but she gets a place in the school due to Phil's intervention. Zsa Zsa receives a letter from her mother asking her to join her in Spain, but she does not want to go, so tries to prove she is useful by babysitting Shirley's housemate Heather Trott's baby George and saying it is a shame after Shirley went to all the trouble to get her into school. Shirley acts like she does not care if Zsa Zsa stays or goes but after she tears up Tina's letter, she lets on to Heather that she would have missed Zsa Zsa.

Zsa Zsa and Leon start a proper relationship, and she starts working on Whitney's market stall. She starts receiving gifts from an unknown person, calling themselves "The Blue Masquerader". They eventually discover the gifts are from Peter. Lucy attempts to help Peter break up Leon and Zsa Zsa, but after he changes his mind, she reveals to Zsa Zsa that Leon got her pregnant, causing Zsa Zsa to end the relationship. After a while, Fatboy attempts to reunite the couple as Leon has not been himself since. The couple nearly reunite, until Leon kisses Whitney without permission. Zsa Zsa travels to Hampshire with Leon, Fatboy, Lucy and Whitney and plans with Lucy to get revenge on Leon, though the plan fails when Lucy tells Leon about it and he runs off into the woods. The next day Leon is missing and she does not believe Lucy when she says Leon went out early because he left his wallet behind. She demands to know why Lucy lied so Lucy leaves. They search for Leon and find his mobile phone with blood on it, leading them to believe that Peter hit him with Fatboy's van the night before. However, he turns up having been in police custody overnight. Upon their return to Walford, Leon attempts to make amends with Zsa Zsa but she says she preferred it when she thought he was dead.

Zsa Zsa and her friends uncover the body of Owen Turner in Albert Square's gardens, and are horrified. The next day, Zsa Zsa makes a joke when Leon speaks after saying nothing all day, and he leaves. She finds him and apologises, and comforts him as she did not realise how badly he was affected. He then tells her about when his mother died in a car crash. Phil ejects Zsa Zsa and Shirley from their home, incorrectly claiming that Shirley has conspired with his mother Peggy against him, leaving them homeless. They move in with Heather, but the landlord fails to make mortgage payments, meaning bailiffs turn up to take the house. They agree to squat but Shirley leaves the house, meaning they cannot return there. Zsa Zsa tells Shirley she is useless and would rather live in the gutter. She then asks Mercy if she can stay with her, and starts working in the café. Zsa Zsa later accidentally reveals that Lucy's miscarriage was actually an abortion to Jane, when she misunderstands Jane being upset over Lucy being dishonest about cheating to gain her grades.

Leon obtains two tickets to a music festival in France and chooses to take Zsa Zsa with him. However, Zsa Zsa finds out from Mercy that Leon slept with Glenda Mitchell. She lies to him that she slept with someone else a few months ago to see if he will confess, but he says he has not been with anyone else. Later, she seduces him in Fatboy's van but throws him out in his underwear, humiliating him. She says goodbye to Shirley and leaves Walford for France in the van.

Tina moves to Walford in 2013 and during a conversation with her niece Nancy Carter she says that wherever Zsa Zsa is she hopes that she is having the time of her life.

Zsa Zsa is mention on 4 April 2016, when Tina is talking about not having the responsibility of look after a baby. She remarks how she had worried about leaving electrical appliances in dangerous places and Zsa Zsa pulling them down.

Zsa Zsa is mention on 10 July 2018 and that Tina Carter visited her in France.

In January 2021 Zsa Zsa calls Mick Carter to tell her that she hasn't talked to Tina recently. 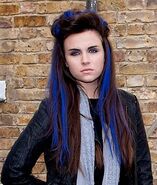 Add a photo to this gallery
Retrieved from "https://eastenders.fandom.com/wiki/Zsa_Zsa_Carter?oldid=200828"
Community content is available under CC-BY-SA unless otherwise noted.