Zoe Slater first arrived in Walford on September 2000 with her family, which consists of her sisters Kat, Lynne and Little Mo; their father Charlie, and grandmother Mo. Over a year later, Zoe and Kat argue about Zoe's decision to move away from Walford to live with her uncle Harry. Kat tells Zoe she cannot go but Zoe walks out. Kat follows and blurts out that she is Zoe's real mother. She then explains that she fell pregnant at 13 after Harry raped her, thus revealing that Harry is her father. Zoe is shell-shocked, and Kat slashes her wrists in despair. Zoe runs away, unable to take in all the recent revelations.

While away, Zoe contacts Little Mo - the only other member of the family who did not know about Zoe's parentage - who persuades Zoe to come home, but after another argument with Kat, Zoe leaves again. She ends up living on the streets where she is discovered sick and penniless by Roxy Drake, a pimp determined to recruit Zoe. Roxy provides Zoe with meals and cigarettes, finds her a flat and forces her to prostitute herself. Roxy and fellow prostitute Kelly Taylor (Brooke Kinsella) dress and make-up Zoe, but she gets drunk and vomits on her client. Kat arrives the next day to take Zoe home, but Roxy tries to prevent her taking Zoe, so Kat headbutts her.

Zoe gets engaged to Anthony Trueman, but leaves yet again, returning several months later, this time with Kelly in tow, and her engagement to Anthony is broken off. She briefly dates Dennis Rickman, but he is secretly in love with his adoptive half-sister Sharon Watts, and they eventually reveal their relationship. Sharon and Dennis' father Den Watts suggests that to keep Dennis, Zoe should claim she is pregnant, since Sharon is infertile. The plan works but Zoe worries Dennis will realise she is not pregnant, and he refuses to sleep with her. Den offers to sleep with her so she can get pregnant and pretend the baby is Dennis's. Dennis catches them in bed together and leaves, but not before telling Den's wife, Chrissie.

Chrissie persuades Zoe to abort the baby and tells her they should team up for revenge on Den. They get together with Sam Mitchell to do this, meeting up in The Queen Victoria pub. Chrissie sends for Sharon, claiming Den is on his deathbed. She finds out that it isn't true and, upon learning what her father did to Dennis and Zoe, disowns Den before leaving Walford once more; Chrissie had planned this to rid Den of Sharon as payback for cheating on her for Zoe. Right after Sharon leaves, Den realizes what Chrissie did and proceeds to attack her - smashing her head against the jukebox. Zoe stops him by attacking him with a metal doorstop, supposedly killing him. She runs off and Sam goes after her to calm her down. However, he is not dead, and he grabs Chrissie. She hits him again with the doorstop, finally killing Den. Following his murder, Zoe is led to believe that she killed Den - though Sam sees Chrissie kill Den and eventually tells Zoe, who punches Chrissie. Zoe leaves for Ibiza after having an emotional goodbye from Kat while Chrissie is eventually caught out and charged with Den's murder, and Sam subsequently goes on the run.

In 2015, Kat reveals that Zoe has moved to Spain and announces to Mo and Stacey Slater that she will start saving up to visit Zoe. However, Mo tells Stacey that Zoe does not want to see Kat. Mo attempts to contact Zoe to get her to reconsider, but Kat finds out two days later from a text from Zoe that she cannot see her because of her new job and boyfriend and she feels she needs to move on with her life. In May 2015, Kat visits the convent where she give birth to Zoe and it is revealed to the viewers that Kat had twins - meaning Zoe has a twin brother. Kat moves to Spain and visits Zoe, who rejects her mother, leaving Kat devastated. Kat also reveals that Zoe is now engaged.

Zoe was mentioned by Kat in March 2020, after she tells Bex Fowler that she hasn't seen Zoe in 15 years. 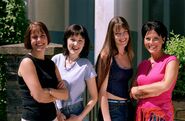