Zoe Newton was born in 1968, She was in an one and off relationship with Nick Cotton, when she was still at school, at the age of 14, which Zoe's parents were not very happy about, and they never got on with Nick either.

Zoe became pregnant, and gave birth to her and Nick's son Ashley Cotton back in August 1983, when Zoe was just 15 years old, with Nick not being around, to see the birth of his son, coz he was all the alway in a pub across London, which Nick claimed he was celebrating, and got out of hand.

Zoe's parents never got know their grandson Ashley, due to a family fall out.

Zoe arrives in Walford as the secret wife of Nick Cotton, along with their son Ashley. She was in an one and off relationship with Nick since 1982, and were never married, but had not appeared previously in Walford and had never met Nick's mother Dot until she arrives in 1993. She is keen that Dot gets a chance to meet her grandson, and Dot and Ashley eventually grow close after a few meetings. She and Nick are planning to move away to Gravesend and Zoe wants Dot to come and live with them. Dot is reluctant at first but later agrees to move away and leaves Walford with them in August 1993.

When Dot returns to Walford in 1997 she reveals that off-screen Zoe and Ashley had moved away after Zoe grew tired of Nick's criminal activities and he had been arrested for drugs possession.

In a special spin-off episode entitled The Return of Nick Cotton which first aired on 1 October 2000, Nick is released from prison and reunites with Ashley and Zoe after Zoe's brother Eddie tells Nick about her whereabouts. Zoe isn't happy to see him back and offers him money to leave for good. Some thugs then come after him. After trying to escape from the thugs, he and Ashley steal a car to escape them. Zoe doesn't want Ashley to go with Nick knowing how much of a bad influence he is but she cannot stop him and he drives off with Nick back to Walford.

When Nick and Ashley return to Walford in November 2000, Nick gets into a feud with his old enemy Mark Fowler. It leads to Nick cutting the brakes on Mark's motorbike in June 2001. Ashley steals the bike and dies after crashing into a shop window. Zoe is devastated when she returns for his funeral and attacks Nick, blaming him for Ashley's death. She knew that Nick would never be a good father to Ashley and Ashley should have never come with Nick to Walford. After the funeral, she leaves Walford and has not been seen or heard from since. 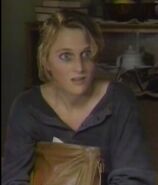 Zoe Newton (The Return of Nick Cotton)
Add a photo to this gallery
Retrieved from "https://eastenders.fandom.com/wiki/Zoe_Newton?oldid=187444"
Community content is available under CC-BY-SA unless otherwise noted.