Yolande arrives in Albert Square on 16 September 2003, a Patrick Trueman holiday romance. They had met during Patrick's visit to his homeland of Trinidad, where the middle-aged couple enjoyed a steamy affair, much the contrary to Yolande's boring marriage to a strict, uptight, and religious Victor, whose traditional customs included viewing women as objects to bear and raise children.

In September 2008, Patrick accidentally turns off the chiller cabinet at the Minute Mart and then sells the unchilled food which gives a number of customers including Dot Branning food poisoning. The resulting complaints result in a visit from an inspector from the Minute Mart head office. He is so impressed with Yolande's efforts to clean up the shop that she is subsequently offered a job at the Minute Mart HQ in Birmingham. Yolande accepts with delight and busily prepares for the move, however Patrick is less keen, and when confronted, he indicates that he wants to stay in Walford. On 3 October 2008, Yolande leaves Albert Square for a new life in Birmingham. She surprises everyone at her leaving party by announcing that she is leaving alone. But as Patrick waves her off at the tube station, he tells her that once the house is sold, he would follow her to Birmingham. However Patrick does not reunite with Yolande, and on 19 May 2009 Patrick receives their divorce papers.

Yolande re-appears on the 20th March 2017, when Denise Fox has to visit head office to explain why she made the Minute Mart look bad in the Walford Gazette. 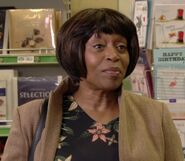 Retrieved from "https://eastenders.fandom.com/wiki/Yolande_Trueman?oldid=195700"
Community content is available under CC-BY-SA unless otherwise noted.