Keisha
Winston made first appeared on 26 November 1985. He is portrayed by Ulric Browne.

His first line is "Bloody pedestrians", said to Den Watts, who gets in Winston's way when he is riding a bicycle. Winston owns the music stall in Walford's Bridge Street Market and over the years proves to be a great friend to his fellow long-standing stall-holder, Mark Fowler. His highlights include shaving his tuft of hair off for charity and helping Ethel Skinner arrive at her birthday party on the night she dies. He is angry when Ian Beale's car crashes into his stall in October 2006.

Winston is always willing to help when other market traders are called away, for example, to appear in a key development of a current plot, e.g. when Stacey Slater needs someone to guard her clothing stall while she and Max Branning slip into an unguarded bedroom to continue the next episode in their illicit affair. Winston generally appears at events held by other Walford residents, such as weddings, funerals and parties or briefly in the background of a scene. He attends the funerals of Pauline Fowler, Pat Evans and Archie Mitchell, stag parties for Garry Hobbs, Lucas Johnson and Ricky Butcher, Jean Slater's birthday party and Ricky and Bianca Jackson's wedding. Sometimes characters steal DVDs or CDs from his stall, including Jay Brown.

In April 2008, Winston's niece Keisha arrives in Walford, and leaves a month later with Gus Smith. Winston wins a Children in Need raffle in The Queen Victoria in November 2008, and in July 2009, Stacey Slater offers him a flower but he refuses. He also appears with Shirley Carter getting drunk in Ian's chip shop in June 2009 and is seen drunk again in August 2009. He is seen with Tracey in August 2009 talking about Max and Tanya Branning, and in November 2009 Ian invites him for drinks at The Queen Victoria but he refuses.

On 15 June 2010 Winston has a rare speaking role as he is seen engaging in a minor conversation with Max. On 2 November 2010 he has another minor speaking role asking for 3 drinks at the newly reopened Queen Vic. In April 2011, during the screening of the wedding of Prince William and Kate Middleton in The Queen Victoria, Winston accidentally rips the cord from the television electrical plug, much to the dismay of the patrons. In January 2012, Winston is distracted by Kim Fox in a bright outfit and accidentally knocks over a ladder, which nearly hits her. In May 2012, Lauren Branning buys a CD from Winston for her mother Tanya Jessop. He allows her to smell some of his breath but Lauren's grandmother Cora Cross misinterprets the exchange and believes that Lauren is buying alcohol from Winston. In July 2012, Winston is chosen as the defender in The Queen Victoria's football team. In August 2013 he locks market inspector Tamwar Masood in a portable toilet as a joke, but Kat Moon and Bianca are blamed. He has another speaking role in April 2014 when he asks Alfie Moon for a black armband, as a mark of respect for the recently deceased Lucy Beale. 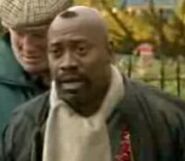 Winston outside The Queen Victoria
Add a photo to this gallery

Retrieved from "https://eastenders.fandom.com/wiki/Winston?oldid=206139"
Community content is available under CC-BY-SA unless otherwise noted.