Mrs Roper
Willy Roper made his first appearance 1 June 1995. He is portrayed by Michael Tudor Barnes.

Willy was first seen in June 1995 at the funeral of Tom Palmer, who had an allotment near to Arthur Fowler's in Walford. Willy was also an allotment owner, and he was instrumental in getting Arthur elected as the secretary of the allotment committee. Arthur began raising money to create a new eco-friendly, urban garden, which was named the Flowering Wilderness Fund. Willy took a keen interest in all of his financial dealings. By the end of the year Arthur had managed to raise £20,000 for the garden, and this was enough to tempt Willy to crime.

Willy was the sole carer of his senile mother. Desperate to get the funds to pay for her placement at a nursing home, he decided to con Arthur into signing the fund money into various accounts, and then left him to face the consequences when the money was declared missing. For a second time, Arthur was faced with a police investigation and with all the evidence stacked against him, he was soon arrested in early December 1995 and ended the year in prison. This was too much for Arthur, who was unable to face the prospect of serving a prison sentence for a crime he didn't commit. Just before Christmas, Willy said to his mother that they will soon be coming into money, twenty grand. Upon his incarceration Arthur suffered a mental breakdown and refused any contact with Pauline, which devastated her. On Christmas Day he told her not to contact him. At the same time Wicked Willy rubbed his hands in glee.

Not content with putting Arthur in prison, Willy spent the beginning of 1996 trying to woo Pauline in his absence. Her son Mark was furious at the amount of time Willy and Pauline spent together, but Pauline found Willy to be a great comfort and refused to stop seeing him socially. Following his mother's death in April 1996, Willy asked Pauline to go on holiday to Jersey. Mark correctly figured out that his real motive was to put the stolen money in an off-shore account under a false name, but Pauline refused to believe Mark's accusations. While away, Pauline and Willy became very close, but this all changed when she discovered his counterfeit credit cards and her suspicions began to raise. She didn't inform Willy of her discovery, but immediately returned to Walford the following day after he confessed his undying love for her.

Back in Walford, a furious Pauline was then persuaded by Mark to extract a confession from Willy. She lured him over under the pretence that she wanted to rekindle their friendship. On their night alone Pauline plied Willy with alcohol and seduced the truth from him. Willy — momentarily believing that his criminal genius would impress Pauline — confessed to embezzlement and told her how he had managed to frame Arthur. The police were informed and Willy was arrested and charged, though he was later released on bail.

Arthur was cleared, but before Pauline could pass on the good news she was told that he had been involved in a prison riot. Arthur was released the next day, but he had received a nasty blow to the head in the riot, although no one realised the seriousness of his injury until it was too late. Only a few days after his release in May 1996, Arthur suffered a brain haemorrhage on the allotments, and died the next day in hospital. Arthur's funeral was held in June 1996 and Mark was incensed to see Willy in attendance. He confronted Willy and ended up assaulting him.

Willy never showed his face in Walford again and was probably jailed for his crimes. 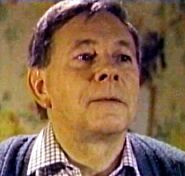 Willy Roper
Add a photo to this gallery
Retrieved from "https://eastenders.fandom.com/wiki/Willy_Roper?oldid=197146"
Community content is available under CC-BY-SA unless otherwise noted.