Ethel Skinner
Willy was a Pug that was owned by Ethel Skinner who was named after her husband William Skinner after he passed away. During Willy's lifetime he would always be carried around by Ethel, who would rarely go anywhere without him.

Over Willy's lifetime he got into many scrapes and had many adventures and exciting experiences, including being disastrously bathed by Ian and Kelvin and going missing and being adopted by a foreign war veteran briefly in 1986, leaving Ethel devastated. She even went to the extent of holding a seance to try and find him again!

Willy often hung around Roly in the Queen Vic, especially while Ethel did the cleaning.Personality

Willy was spoilt, greedy and mischievous. The other characters couldn’t stand him: the local doctor complained bitterly about the mess Willy made on the pavements.

Willy is Ethel Skinner's constant companion. She rarely appears on-screen without him tucked under her arm. He was named after her late husband, William Skinner. A lot of rather puerile humour is derived from Willy's name. Ethel's famous lines being either, "Where's my Willy?" or, in a double entendres, "Has anyone seen my Willy"

Willy can often be quite mischievous. When Ethel is preparing the food in The Queen Victoria public house one day, Willy eats all the expensive steak for the steak and kidney pies when her back is turned. Ethel replaces the meat with a less costly cut and everyone comments that the pies were not up to standard. At Christmas 1990, he sneaks into the Fowler's' and begins eating the turkey.

Willy is kidnapped in 1986. He is eventually found by Detective Roy Quick in a pet shop, but when Quick returns with Ethel, Willy has been sold. Willy is tracked down to his new owner, Mr. Pavasars, who has renamed him Rasputin. Lou Beale fetches him back and returns Willy to his rightful owner. When Ethel falls and breaks her hip, Willy stays with Dot Cotton, and they find each other a strain. Dot isn't the only one who can't tolerate Willy. First Ernie Mears and then Benny Bloom want to marry Ethel, but only if she will get rid of Willy. Ethel can't part with her beloved dog so she turns them both down.

When Ethel and her friends go on a holiday to Clacton, Willy has to go too, in a holdall. He is discovered by the owner of the bed and breakfast, but fortunately for Ethel he is a dog-lover too and allows Willy to stay.

Willy is a touch sensitive, and when Dr. Harold Legg makes several remarks about "dog mess" in the Square, Ethel fears it upset him to the extent that he can't perform at all. Luckily, Willy's constipation is eventually resolved.

On 16th February 2016, Gavin mentions to Dot that her deck playing cards are old and have a nice feel to them. He points out a damage one and Dot mentions Ethel Skinner's dog Little Willy it during a game. 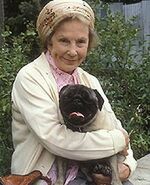 Ethel Skinner and Willy
Add a photo to this gallery
Retrieved from "https://eastenders.fandom.com/wiki/Willy?oldid=199769"
Community content is available under CC-BY-SA unless otherwise noted.