In November 1994, Walford resident Robbie Jackson takes in a dog he assumes to be a stray, naming him Wellard. The dog's owner, Mr Hammond, locates him and demands him back, but Wellard later returns to Albert Square of his own accord. Robbie realises he has been mistreated and has run away. Mr Hammond admits to neglecting Wellard, and allows Robbie to keep him. Wellard fathers puppies with Grant Mitchell and Nigel Bates's greyhound, Freida; however, the puppies are stillborn. When Robbie begins a relationship with a woman allergic to dogs, she gives him the ultimatum of choosing between her and Wellard: Robbie chooses Wellard. Several years later, when Robbie is due to leave Walford to live in India, Wellard is run over, delaying Robbie's departure. He is cared for by Robbie's sister Sonia Jackson, who gives him to her friend Gus after Robbie's departure. When Gus is involved in a minibus crash, Wellard is able to save his owner by leading him to a spot from where he can call the emergency services.

Wellard is reported to the police when he bites local café owner Ian Beale on the buttocks. He is taken away, with the possibility that he will be euthanised, but Gus Smith and Deano Wicks launch a campaign to save him, under the moniker "Walford One Owed Freedom" (WOOF). When Wellard is put on trial, Ian's partner Jane presents character witness statements for the dog, written by Ian's children, Lucy Beale and Peter Beale. Wellard is found guilty, but as a result of the statements, Gus is allowed to take him home as long as he keeps him on a lead at all times. When Gus leaves Walford to travel with his girlfriend Keisha, he leaves Wellard with his friend Mickey Miller. Mickey sells Wellard to Vinnie Monks, who intends to give him to his girlfriend Shirley Carter. When it transpires Shirley does not want him, Vinnie Monks gives Wellard to the Jackson Family. Bianca Jackson feeds Wellard a chocolate, causing him to suffer from theobromine poisoning. He has to be euthanised, is cremated, and has his ashes scattered on the local allotment.

Kyte's pedigree name is Minka Independence Kyte. She comes from a company called Stunt Dogs along with Terrence.

Kyte loves entering agility competitions with her owner, and has won lots of prizes. She lives with Terence and really enjoys going on long walks with him across the fields near home.

Kyte also does work for charity. Her owner takes the EastEnders dogs to local Rescue Homes to publicise the need for dogs to be rehomed.

Kyte has her own pet passport so she can travel for film roles abroad. During his time on the show he was trained by Gill Raddings.

Kyte had a big part in A Touch of Frost. She played a police dog that was trained to find illegal drugs, and in the programme she saved Frost's life from an attacker!.

Kyte has also appeared in the Johnny Vaughan Show, 102 Dalmatians and Gladiator. She loves starring in the big movies.. 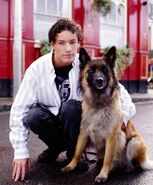 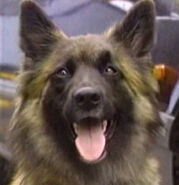 Wellard Dies (15 August 2008)
Add a photo to this gallery
Retrieved from "https://eastenders.fandom.com/wiki/Wellard?oldid=174721"
Community content is available under CC-BY-SA unless otherwise noted.