Start a Wiki
watch 01:51
The Loop (TV)
Do you like this video?
Walford Towers is an 18 storey tower block in Walford near Albert Square. Some of the residents have featured in EastEnders over the years. The tower block can be seen from Albert Square and is a short walk from there. Until 1993 Pete, Kathy and Ian Beale lived in a flat on the 14th floor and they often had guests visiting or staying, either family or friends. Walford Towers was demolished in summer 2017.

Walford Towers was built in the early 1970s on a bombsite which once house terraced streets and a warehouse. In 1974 the Beale family from nearby moved into a flat on the 14th floor.

By February 1985, the Beale family had lived in flat 14B on the 14th floor. Pete, Kathy and Ian Beale. Ian flew the nest in 1988 when he married Cindy Williams. Pete and Kathy split up later that year and Kathy moved into a flat on Albert Square. When Pete died in a car crash in May 1993, Aidan Brosnan and Mandy Salter squatted there. When Phil Mitchell took over the tenancy, he and brother Grant Mitchell evicted Aidan after he refused to move. Phil lived at the flat until February 1994 when he bought a flat in Albert Square.

In summer 2017, Walford Towers was demolished.

Karen Taylor says she has been looking for her friend Sparky from Towers who is a man with a Van and bricks. Joyce Murray said she heard he was dead (Episode 5604, 24 November 2017).

Kathy and Pete Beale's living room and kitchen in 1985

Kathy and Pete Beale's hallway in 1988 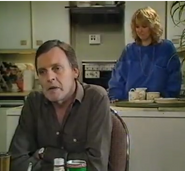 Pete and Kathy in their flat in February 1988.

Walford Tower Corridor (26 May 2017)
Add a photo to this gallery
Retrieved from "https://eastenders.fandom.com/wiki/Walford_Towers?oldid=122213"
Community content is available under CC-BY-SA unless otherwise noted.