It is currently designated as stop C (each bus stop in London has a unique letter per local area), and according to the signage at the top three buses are denoted as stopping there, including one night bus. The stop has a modern Adshel shelter, however it houses a rather uncharacteristic non-TFL bench.

In a more recent episode a Number 30 bus is featured departing towards Central London, even though 30 is not one of the routes labeled on the bus stop. This bus's route runs Walford, Hackney, Dalston, Highbury, Angel and final destination Trafalgar Square, which is roughly the route of the real-life No. 30, with Walford taking the place of Hackney Wick. 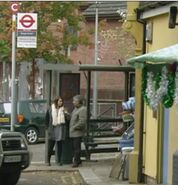 Add a photo to this gallery
Retrieved from "https://eastenders.fandom.com/wiki/Walford_East_Bus_Stop?oldid=142595"
Community content is available under CC-BY-SA unless otherwise noted.