Restaurant
Walford East is a restaurant located in the heart of Albert Square which is owned by Ian Beale and Masood Ahmed. Initially the restaurant was called Ian Beale @ Le Square, however Ian was short of money and took a loan out from Janine Butcher, who renamed it to Scarlett's on the opening after her daughter. Ian re-named it Beales and ran it until February 2016, when he sold it to Costmart to pay for Bobby Beale's boarding school tuition fees.

When Jane Beale arrives back in Walford in 2014, she and Ian decide to become business partners. Jane begins planning to rebrand Scarlett's and proposes renaming the restaurant. The pair settle on 'BEALES' and the restaurant is soon renamed. A relaunch is planned to unveil the new look restaurant including a brand new interior. Beales closes after Steven Beale torches the restaurant in an attempt to kill Jane.

In 2018, when Ian Beale and Masood become business partners, they decide to use Masood's idea of a 'fusion restaurant', and Masood decides to call it Walford East, which later becomes the official name of the restaurant. In 2019, Masood leaves Walford and sells his share of the business to Max Branning. Habiba and Iqra run the restaurant day-to-day once Masood departs.

In the mid 80's the location was occupied by a signwriters.

"Moon and Sons" was was an antiques emporium originally ran by Eddie Moon, Anthony Moon and Tyler Moon. When Anthony got into gambling problems with Derek Branning, he was forced out of the square. Thus leading to the closure of Moon and Sons. 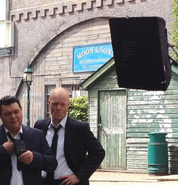 Moon & Sons seen behind Jake Wood during a photoshoot
(2012).
Add a photo to this gallery

Le Square Interior
(2013).
Add a photo to this gallery

Scarlett's when Janine Butcher was co-owner. 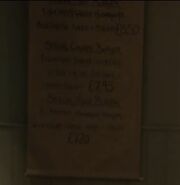 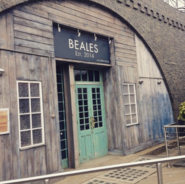 Walford East
(6 February 2020)
Add a photo to this gallery
Retrieved from "https://eastenders.fandom.com/wiki/Walford_East_(Restaurant)?oldid=206407"
Community content is available under CC-BY-SA unless otherwise noted.