Walford is a fictional borough of East London in EastEnders. The name suggests a conflation of Walthamstow and Stratford, both real places in East London. Walford has a fictional London postal district, London E20, and a fictional tube station, Walford East, which is located on the EastEnders tube map in the position normally occupied by the real Bromley-by-Bow tube station.

Walford was once on the site of an old Saxon village. Walford was once in the historic county of Middlesex but as London grew it became a suburb of London by the mid 1800s. This development was recognised by the creation of the County of London in 1889 (in which Walford would presumably have lied.) All over, squares and streets sprung up. Walford was given an East London postcode. By about 1900 Walford had a population of about 100'000. A market was established in Bridge Street, Walford, underneath a railway arch. Notable streets as well as Bridge Street was Albert Square, Turpin Road and George Street. The borough gained 2 tube stations, Walford East Station and Walford West Station. Notable families was the Beales, Fowlers and Watts of Albert Square, one of the most prominent areas of the borough. The Queen Victoria public house opened in 1898 in Albert Square. This was one of many pubs in the area. Walford suffered a lot of bomb damage in WW2 and several Victorian streets were razed to the ground. After the war, blocks of flats were built and in the early 1970s, Walford Towers, a 16 storey towerblock. By this time, many people from all over the world moved to Britain and settled in London, including Walford. In 1965, the larger county Greater London replaced the County of London, and if Walford was not already in Co. London but had remained in Middlesex, it would at that point have become part of Greater London.

By the end of 1984, Walford was quite deprived but there was strong community spirit. Residents blamed the deprivation on the government, Lou Beale, of 45 Albert Square especially.

Walford has many amenities to serve the residents from the Bridge Street and Turpin Road markets to Walford General Hospital. The high street has many shops. There is Walford Garage and Walford FC football club. 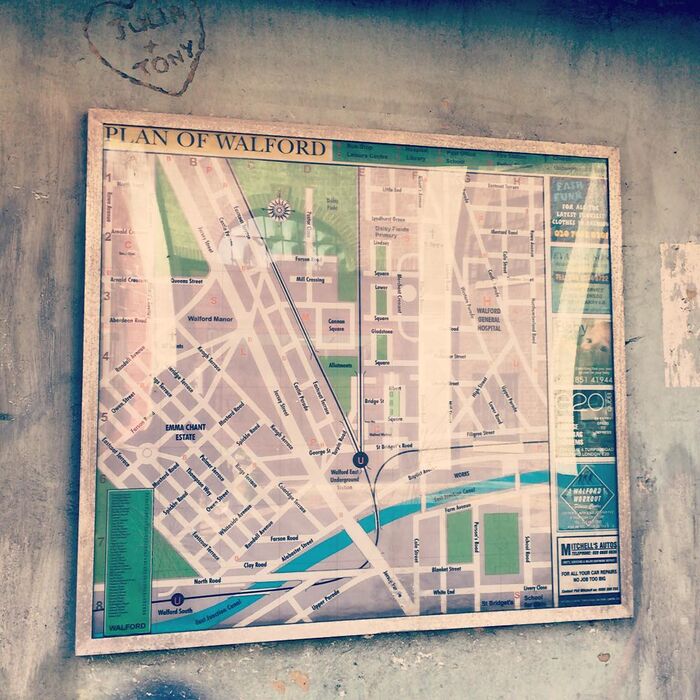