When her daughter Kat had her twins, she sent Mo Harris to collect both babies to bring them home but when Mo arrived Viv said there were only taking Zoe. Viv was cut up about it. She never spoke about him after that day.

Viv said that she didn't want to take the risk of him turning out like his father (Harry Slater).

Vivienne is the late wife of Charlie Slater  flashbacks in a near-death sequence when Kat attempts suicide. Additionally, Natasya Rush portrayed Viv as a child in the spin-off episode EastEnders: Pat and Mo

Viv's parents are Mo Porter and Stuart Mullins. They had a one-night stand and therefore Viv is brought up by Mo and her stepfather, Jimmy Harris with little contact with her father. After leaving school at 15, Viv meets Charlie Slater at a dance. They began dating and get engaged. After losing her virginity to Charlie, Viv becomes pregnant at 16. Mo, believing Charlie will not want to marry her, tries to force her to have an abortion; however, Charlie proves supportive and Viv gives birth to daughter Lynne.

Charlie and Viv marry and Viv goes on to have three more daughters: Kathleen,Belinda and Maureen. As the girls are growing up, Viv becomes a hard, bitter, cold woman. With the death of her stepfather Jimmy, she has no fatherly guidance and resents the fact that she has no sons. She favours her oldest daughter Lynne, whilst Kat, Belinda, and Little Mo all vie for Charlie's attention, making Viv feel second-best to her daughters.

When Viv catches 13-year-old daughter Kat trying to run away, it emerges that Kat is pregnant from having been raped by her uncle Harry. Kat tells Viv that Harry raped her, however Viv pretends not to believe her but secretly orders Harry to leave, causing him to flee to Spain. Viv keeps this from Charlie and sends Belinda and Little Mo away to live with Charlie's sister Violet in order to hide Kat's pregnancy. After Kat gives birth to her daughter Zoe. Viv decides to raise Zoe as her and Charlie's youngest daughter. Viv dotes on Zoe, but continues to treat her own daughters with contempt; although they loyally stick by her, they come to resent her harsh discipline. Eventually, Viv has a stroke and is nursed mostly by Charlie and Little Mo. She manages to make amends with all daughters before her death at age 48. 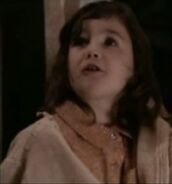 Young Viv Slater
(25 December 2018)
Add a photo to this gallery
Retrieved from "https://eastenders.fandom.com/wiki/Viv_Slater?oldid=207652"
Community content is available under CC-BY-SA unless otherwise noted.