Tricked into entering the car of Aidan Maguire's goons-Phil Mitchell ordered Aidan just to scare him, so he is probably not dead, but held captive.

Donna Yates (foster)
Vincent Hubbard is the missing husband of Kim Fox and father of Pearl and Mica.

Born 11th December 1973 (His passport in 2018 says 1973) to young parents Henry and Claudette Hubbard. Phil Mitchell recalls in a episode dated 15 May 2015 that he remembers Vincent "Snotty little brat. Round at our place once. Bawling his eyes out cos his old man was late picking him up." Vincent's father Henry Hubbard was friends with local publicans son Den Watts.

Vincent enrolled at Hendon Police College and stuck at it for a few months but was not cut out to be in the Police, he gave up and became a bouncer on a few clubs and pubs.

He then got mixed in with the wrong crowd and started to money launder and sell drugs. One night clubs was a raided and Vincent was blamed. Vincent was arrested and looking at 6 years, he was cut a deal to inform on criminal activity to avoid jail time.

He has had a previous relationship with Ronnie Mitchell, he's also the person who gave Ronnie her gun. He's also an enemy of Phil Mitchell. He met Kim Fox during a cruise and later married her and got her pregnant - resulting to the birth of Baby Pearl.

Vincent had an off-screen relationship with Ronnie Mitchell in late 2013, which she ended to flee to Ibiza with sister Roxy after Carl White's death. At a similar time he also meets Kim Fox, and goes with her when she leaves Walford to work on a cruise ship. The two later marry. In a flashback episode broadcast on 19 February 2015 and set on Good Friday 2014, Vincent gives Ronnie a gun hidden in a bouquet of white roses at her own request. Later, Kim falls pregnant, and decides to go to his house and tell him. She sees Vincent covered in blood and two other men cleaning up after him, suggesting that he was involved in criminal dealing, and returns to Walford alone in December 2014.

He returns in February 2015 having followed Phil Mitchell home, confronting him and Billy Mitchell about the whereabouts of Ronnie. Billy reveals to him that she is in a coma, and upon visiting the hospital he leaves a single white rose for Ronnie so she knows he has visited. Kim's sister Denise Fox mocks Kim's relationship with Vincent and she goes into premature labour. Vincent watches from afar as she is taken to hospital, and Kim later explains that she ran away from Vincent after finding out that he was a criminal, and chose not to tell him that she was pregnant. She grows wary when he tries to get in contact with her again after witnessing her with their daughter, Pearl Fox. Kim tells Denise that Vincent never existed and Pearl was the result of a one-night stand, but later admits the truth.

When Ronnie begins to talk again, Vincent visits her and reminds her that she owes him a favor, also suggesting he wishes to resume their relationship. He also visits his wife, Kim, who reveals what she saw and he explained he was helping a victim of a mugging. Kim is still shaken and he leaves. He then visits his foster sister, Donna Yates, and tells her that he is Pearl's father, leaving her shocked as she didn't see Kim as his type. He later decides that he wants to repair his marriage for the sake of their baby, and when Ronnie requests that he find some way to prevent a drug dealer from testifying against her grandmother-in-law Dot Branning during her trial, he refuses. However, Ronnie reminds him that she still has the gun he gave her.

In December 2017, Phil witnesses ex-cellmate Aidan Maguire talking to Vincent Hubbard, and expresses confusion and annoyance. When Phil confronts Aidan, Aidan says that he is smuggling ill-gained substances into the country and asked Vincent Hubbard to help, however reassures Phil that he would have asked him, only as Phil is a recovering alcoholic and is also recovering from a recent liver transplant he felt it would not be a good idea. Phil calls Vincent a "grass". Phil is offended, however later asks Aidan what he can do to help. Aidan says he will be in touch. Aidan later organises a meeting between Phil, Vincent and himself. Vincent and Phil argue, and Aidan tells Vincent to leave. After a heated discussion between Aidan and Phil, Phil refuses to work with Vincent and Aidan leaves. Later, however, he tells Aidan he's in. Aidan says he will be in touch.

After Ben Mitchell is beaten up, Phil is seen asking Aidan for a "big favour" over the phone. A few days later, when Aidan and Phil meet, Aidan tells Phil he has been making some enquiries, however Vincent barges in and cuts their conversation short. Vincent says he has sorted their problem, and Aidan, obviously to make sure nobody hears, pretends he doesn't know what he is talking about. Vincent clarifies, and says he has found a van in Canning Town with black-out windows. Aidan asks Phil what he thinks. Phil says to Vincent that all these websites he has been on would be showing up in his search history, and that if the police came sniffing it would be easy to find. He says that even if he has deleted it all it will still be in the cloud. Aidan says he should get rid of the tablet, and Vincent says it is Kim's, but says he will do it anyway. Their "little secret" is later revealed, as Luke Willmott-Brown is bundled into a van by two masked men.

As Vincent looks for the tablet at home, Kim walks in and tells him she has lost the baby. They hug.

Vincent acquired enemies so Phil arranged for Vincent to be scared off by some thugs. Vincent was last seen in the back of a car with some sinister looking men on the 20th April 2018. Kim has been struggling since Vincent's disappearance. In June 2018 she reported him missing. A body matching his description was found. Luckily it was not Vincent. 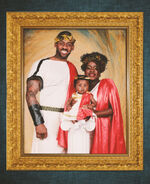