Vicki Fowler is the daughter of Michelle Fowler and Den Watts, sister of Mark, Dennis and Sharon and girlfriend of Spencer Moon.

She is the only blood relation of Den Watts that is still alive.

16-year-old Michelle Fowler gets pregnant in 1985 after a one-night stand with her best friend Sharon's father, Den Watts. Her family decide Michelle should have an abortion but she refuses, keeping the baby but keeping the father's name a secret. Vicki, named in honour of her great-grandparents Lou Beale and Albert, is born in May 1986 and Den is allowed to hold her but he and Michelle agree that he should keep his distance so nobody guesses he is her father. Michelle raises Vicki with her fiancé, Lofty Holloway, who she marries after jilting him at the altar, although Den provides for Vicki secretly. After Sue Osman realises that she has had a phantom pregnancy, she is devastated and suggests to Michelle that she lets her and Ali Osman adopt Vicki, which infuriates Michelle. Vicki's grandmother, Pauline Fowler, realises Den is Vicki's father when she sees him give money to Michelle and slaps him. Lofty begins to pressure Michelle to let him adopt Vicki and have another child, but their marriage soon breaks down after Michelle has an abortion and Michelle refuses to name Vicki's father upon Lofty's departure. When Den is shot and presumed dead, Michelle tells Sharon that Vicki is her half-sister and Sharon is devastated whilst Arthur is furious. Vicki survives meningitis but Dr Legg fails to diagnose it, reuniting Michelle and Sharon.

Michelle decides to go on the run with Clyde Tavernier after he is accused of murdering Eddie Royle, taking Vicki and Kofi Tavernier, Clyde's son, with them. Michelle and Clyde are caught by the police when trying to flee the country and Vicki and Kofi are sent to a children's home, but are later collected by their grandmothers. Vicki is kidnapped when an old woman, Audrey Whittingham, takes her from outside her school. A national police investigation is launched and Vicki is returned home safely. When Michelle is shot by Dougie Briggs, Vicki discovers she is Sharon's half-sister when she stays with Sharon and her husband, Grant Mitchell and the following day, Sharon explains things to Vicki. Michelle is furious with Sharon about Vicki knowing. The truth about Vicki's paternity spreads and Michelle's aunt, Kathy Beale, is upset about not being told by Michelle herself, finding out from Mandy Salter. In October 1995, Michelle and 9-year-old Vicki leave Walford for Birmingham, Alabama, in the United States.

A teenage Vicki returns to Walford in February 2003 when she runs away from home. She has been arguing regularly with Michelle and it is decided that she can stay in Walford. After clashing with her grandmother Pauline, Vicki moves in with Sharon. Manipulative and mischievous, Vicki does as she pleases. Just weeks later, she discovers that she and Sharon have a half-brother, Dennis Rickman and persuades him to move to Walford. When she becomes pregnant by Spencer Moon, Sharon, who believes she is infertile, offers Vicki £10,000 to give her the baby to bring up as her own. Spencer wants to be a father but Vicki terminates the pregnancy. Dennis soon tells Vicki that Den, who had supposedly died in 1989, is alive and living in Spain, and she brings him back to the Square to reunite with his family. She's horrified to discover that Sharon and Dennis have started a romantic relationship. Although they aren't biologically related, Vicki cannot accept it and rebels by dating Ash Ferreira, which ends when he realizes that she is using him to get at her siblings. Eventually, Vicki and Den's objections take their toll on Sharon and Dennis and they end the relationship.

In 2004, an 18-year-old Vicki starts a relationship with her 46-year-old college lecturer, Tommy Grant; her family, particularly stepmother Chrissie Watts, are outraged. Tommy feigns love for Vicki and they talk about leaving Walford to go travelling. Knowing that Tommy is untrustworthy, Chrissie attempts to seduce him. After a brief kiss, Chrissie strips him naked in the toilets of The Queen Victoria public house, on the promise that she will soon join him. She steals his clothes and forces Vicki to see him for the lying cheat he is. Vicki is devastated and initially furious with Chrissie but eventually realizes she had her best interests at heart. During a family meal on Christmas Day 2004, Sharon and Dennis announce that they have resumed their romantic relationship, only for Dennis's girlfriend Zoe Slater to announce that she is pregnant. Sharon decides to go to America alone and persuades Dennis to stay with Zoe and their baby. Den talks to Sharon alone, trying to persuade her to stay. Vicki overhears him say he does not love Vicki as much as he loves Sharon. Deciding she cannot live with such a father, Vicki decides to return to her mother in America. It is later revealed that she has moved to Australia and reunited with Spencer. In January 2014, Sharon tells Spencer's brother, Alfie Moon, that they need someone to help them open a bar in Sydney, so Alfie goes there for a few weeks to work with them. When Lofty returns to Walford in 2019, he gives Martin a cheque of £20,000 to give to Vicki. 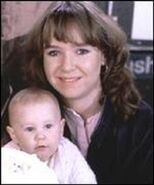 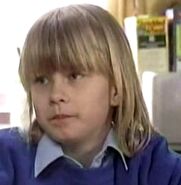 Family photo.
Add a photo to this gallery
Retrieved from "https://eastenders.fandom.com/wiki/Vicki_Fowler?oldid=199394"
Community content is available under CC-BY-SA unless otherwise noted.