Jodie Gold
Vanessa Gold, played by Zöe Lucker, is a businesswoman who is described as "dynamic and assured" and is a love interest for Max Branning.

Vanessa arrives in Albert Square to purchase a car from salesman Max Branning. When she returns to sign her paperwork, the two kiss and are seen by Max's daughter Abi. Max's employee and lodger Darren Miller begins dating Vanessa's daughter Jodie, unaware of the connection between them. Upon realising that they are mother and daughter, he and Max toss a coin to decide which one of them will terminate their new relationship. Max loses, but continues to see Vanessa regardless. Suspicious that Max may still be in love with his estranged wife Tanya, Vanessa returns to her controlling husband Harry in Chigwell. The two later reconcile, and Vanessa moves in with Max when Harry discovers the affair and breaks up with her. Jodie disowns her mother over her infidelity, but recants after they narrowly escape a fire in the local pub. Jodie plans to separate from Darren, as she feels uncomfortable spending time in his and Max's home while her father is alone in Chigwell. Instead, Vanessa sacrifices her relationship with Max, and moves back in with Harry.

The following week, Vanessa meets and gets on well with Tanya. On Vanessa's birthday, Tanya interrupts her celebration dinner to tell her Max misses her and that she should go back to him. Jodie agrees, having realised that her father treats her mother badly. Vanessa returns to Max, and Harry serves her with divorce papers. His claim that Jodie has always been a "daddy's girl" prompts Vanessa to reveal he is not her father. Harry begins a series of escalating attacks against Vanessa. Having learned that Harry is not her father, Jodie briefly disowns Vanessa again, before forgiving her. Vanessa tells Jodie that her real father is a Portuguese fisherman, whose name she did not know. Harry's attacks continue: he throws a brick through their window, slashes the tyres at Max's car lot and all of Vanessa's clothes, and kills Jodie's cat. Max and his brother Jack threaten Harry, who retaliates by having Jack locked in the boot of his car on the night of his wedding.

Unbeknownst to Vanessa, Max's feelings for Tanya resurface. Although she remarries, he kisses her on her wedding day and continues to harbour hope that they will reconcile. Max's one year anniversary with Vanessa passes, and Max upsets her with his disinterest. She soon realises that he is still not over Tanya, and when she comforts him, Max makes a spur of the moment marriage proposal, which Vanessa accepts. However, Max and Tanya continue to have an affair, secretly meeting in a bedsit. Vanessa later finds perfume that she knows is not hers or Jodie's, and tells Tanya she knows Max is cheating. Tanya says it is her perfume that Lauren borrowed, and tells Vanessa that Max is not cheating. Vanessa takes off her engagement ring to clean the house and she panics when she cannot find it, though it is revealed that Max has it.

Vanessa is led to believe that Max is fully on board with the idea of a double wedding with Darren and Jodie, so cooks a candle-lit dinner for Max, unaware that he is meeting up with Tanya again because they are preparing to inform their partners of their affair. However, Tanya breaks up with Max and he returns home deflated. He tells Vanessa that he no longer loves her and breaks up with her. Vanessa is furious and heartbroken, accusing another woman of being involved. When Max's daughter Lauren Branning overhears this, she informs Vanessa, along with the rest of the family, that Tanya is the other woman. Vanessa confronts Tanya and reveals the affair to Tanya's husband Greg Jessop. Max leaves Walford but Vanessa believes he will come back to her. Vanessa discovers the bedsit and is stunned when Tanya tells her she broke up with Max and she does not know where he is, saying that if he has left Vanessa, it is because he no longer loves her. Vanessa returns home and completely loses control, smashing up the house. Max's sister Carol Jackson and Jack agree to throw Vanessa out so Tanya and her family can live there, but find her smashing Max's photos, so Carol throws her out onto the street. Michael and his father Eddie Moon witness this and go to help. Vanessa tells Michael that Eddie is a good dad. However, Michael, who is plotting revenge against his father, informs Vanessa that Eddie destroyed his mother's life, before offering Vanessa cash to do the same to Eddie. Vanessa reluctantly agrees, desperate for money to fund Jodie's upcoming wedding. Vanessa gets back in touch with Harry after several months without contact, and asks if he will help pay for the wedding. Harry agrees as long as Vanessa will not attend, but Jodie learns of this and tells Harry not to come.

Vanessa confesses her true feelings for Eddie, but he rejects her, however they later sleep together. Eddie and Vanessa's relationship continues, and eventually she moves in with him and his family, to Michael's despair. Michael attempts to pay Vanessa to leave, and she takes the money, but does not leave Eddie. Eddie then plans to move to Spain, and asks Vanessa to steal Michael's money, which she does. However, she panics as she is caught on CCTV, and tells Jodie what she has done. She says goodbye to Jodie, thinking she will go to prison, and then meets Eddie, thinking he is taking her with him to Spain. After she hands the cash to Eddie, he leaves her stranded on the street, telling her that the police are looking for her. 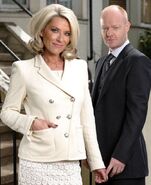 Vanessa and Harry Gold
Add a photo to this gallery

Retrieved from "https://eastenders.fandom.com/wiki/Vanessa_Gold?oldid=178292"
Community content is available under CC-BY-SA unless otherwise noted.