Alfie Moon
Tyler Moon made his first appearance 27 June 2011. He is portrayed by Tony Discipline.

Tyler is one of those cheeky chappies who you can't help but like. He’s a confident geezer who's set to be a sure fire hit with the ladies and a popular fixture in the Queen Vic but will his testosterone fuelled swagger rub Walford’s lads up the wrong way? Time will tell…

This naughty bloke loves a good barney and will take on any challenge going. But beware, Tyler has a very short fuse and cause a ruckus at the drop of a hat. He’s a newbie in the boxing ring, and is pleased as ‘punch’ to be following in his old man, Eddie’s, footsteps.

Tyler works for the family business and him and his dad are as close as father and son can be but of all of the Moon clan, it’s Anthony that Tyler dotes on the most. There's simply nothing in the world that he wouldn't do for his big brother.

Tyler used to work for the family business, alongside brother Anthony, in an antiques/junk shop called The Emporium. There was nothing in the world that Tyler wouldn't have done for Anthony... it's a pity this wasn't reciprocated when Anthony lost The Emporium to Derek in an poker game! Left on his own, Tyler had to work for Derek... but due to his untimely death, Tyler started calling the shots again. His relationship with his other brother, Michael, is more unsettled. Though this has more to do with Michael's inability to bond with anyone (except baby Scarlett), than Tyler.

Tyler had changed his ways, becoming strictly a one woman man when he met Whitney Dean. They seemed like they were going to go the distance and even planned to get married... but when the past came back to haunt Whitney, she realised that Tyler would never be able to understand her like she wanted him to. The pair decided to call it a day, and Tyler left Walford to meet brother Anthony who had a nice little job on a cruise ship.

Though in the main, Tyler's was an easy-going geezer, he had a short fuse and wasn't averse to throwing the odd punch where he deemed it necessary. He once followed his old man into the boxing ring, but ended up in hospital.

Tyler arrives in Walford with his father Eddie Moon and his brother Anthony Moon, and works in his father antiques emporium. He takes up boxing, and floors his first opponent, but does not know that his other brother Michael Moon paid him to let Tyler win. Tyler later dates Poppy Meadow, though she is just trying to make her boyfriend jealous. Michael manipulates Tyler into taking part in an unlicensed boxing match, and sets him up with a boxer called Artie Stiller, who is known to fight dirty. Tyler wins the fight, after taking quite a few beatings, but shortly after he collapses having a seizure in the ring. He later recovers in hospital, and when he finds out that Michael was trying to kill him, Tyler grows violent toward Michael and intimidates him for a while.

Tyler starts a relationship with Whitney Dean, but she leaves him after a few days. Tyler has a one-night stand with Whitney's best friend Lauren Branning. Weeks later they kiss again and the pair begin a casual relationship, though Whitney is jealous. Whitney's boyfriend Arthur Chubb notices that Tyler has lingering feelings for Whitney and warns him off. His casual relationship with Lauren continues until her grandmother Cora Cross tells him she needs stability, so he tells Lauren they should be friends without sex. Derek Branning asks Tyler and Anthony for £4000 they owe him for selling some goods for him, but they only have £3000. They agree to steal copper wire from train tracks for Derek, but Michael finds out and calls the police, leading to Derek's arrest. He is released without charge and accuses Anthony and Tyler of calling the police, increasing their debt to £8000. They realise Michael called the police and confront him and his fiancée Janine Butcher discovers what is going on. She pays off the debt, but Michael takes a beating from Derek.

Tyler tells Whitney he loves her and wants to be with her, she walks away, but later they kiss, causing her to refuse to go on holiday with Fatboy. Whitney then admits she likes Tyler but finds him kissing Lucy Beale. She then tells him to leave her alone. However, Tyler makes a grand gesture with Valentine's balloons and tells her that he cannot as he loves her. Whitney admits she feels the same way and the two become a couple. Whitney believes she is pregnant and when she tells Tyler, he seems reluctant to take on a child. He comes round to the idea, but Whitney discovers she is not pregnant after all. Tyler then moves in with Whitney, but they share a house with Derek and he vows to watch Tyler closely. Tyler visits Eddie and is angry on his return to discover Anthony has left and Derek has taken control of the business. Tyler then works on the market selling Derek's stock. Whitney and Tyler end up sharing the house with several of Whitney's family, so consider getting their own home. Whitney feels guilty over a previous kiss with Joey Branning so tells Tyler. He fights with Joey and breaks up with Whitney. He regrets the breakup, and to prove he loves her, he proposes and she accepts. Tyler is insensitive to Whitney when she learns of the death of Tony King, an older man who groomed her into a sexual relationship with him from when she was just 12. Whitney leaves, later meeting Joey and they have sex. She tells Tyler, and they both realize that they are better off apart. With Michael's help, Tyler cons Danny Pennant into giving him his sports car, and leaves Walford on 6 August 2013 to work on a cruise ship with brother Anthony. 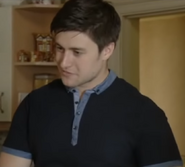 Retrieved from "https://eastenders.fandom.com/wiki/Tyler_Moon?oldid=207602"
Community content is available under CC-BY-SA unless otherwise noted.