Although the pharmacy only appeared in the last decade, it has been featured prominently in several storylines.

During Sharon Mitchell's painkiller addiction from 2012 to 2013, she visited the pharmacy regularly to take out prescriptions.

In 2014, Shabnam Kazemi applied for a job in the pharmacy and, due to her impressive CV and an experience in pharmaceuticals, she was offered the job. However, Shabnam began to have second thoughts about leaving Denise Fox running the Minute Mart alone, so, declined the job offer.

In late 2014, a petrified Linda Carter bought a pregnancy test after being raped by Dean Wicks. She discovered she was pregnant.

In January 2016 Shabnam successfully gets a job working at the pharmacy. It is also mentioned that the Pharmacy has a partner branch in Ealing.

A fish and chip shop.

A hair salon and beauty parlour owned by Julie Cooper. In July 1989 Julie acquires the lease and has the old chip shop converted into her hair salon by Paul Priestly, opening in August 1989. The business eventually fails and in March 1990 she sells the lease to the Mitchell brothers as she leaves Walford. They are brokering the deal for a dodgy mate, Billy Turner, however the premises then just sit vacant and are still unused in late 1991, with the windows boarded over come March 1992.

Following the closure of Julie's, the premises were converted into a video store managed by Nigel Bates and Robbie Jackson. Other employees include Barry Evans, Gavin Sharp, Mickey Miller, and Chelsea Fox.

Natalie Evans also ran Romantic Relations from the store for a short period. When the shop was put up for sale it was bought by Phil Mitchell as an investment for Ben. Billy Mitchell tried to turn the premises into an internet cafe but was unsuccessful when the computers he bought were stolen.

The building was previously used as a Fashion retail shop, selling Saris to Walford. The shop was ran by Manju Patel only for a short time. 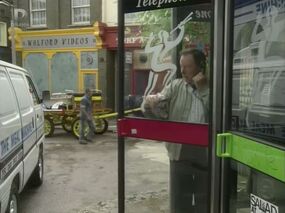 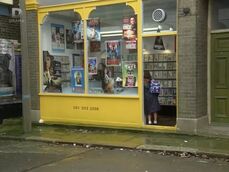 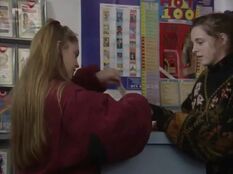 Inside the Video Shop

Video Store Computer (2004)
Add a photo to this gallery 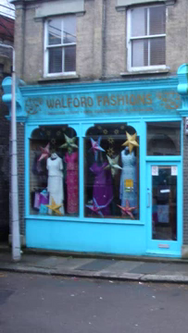 Walford Fashion
Add a photo to this gallery 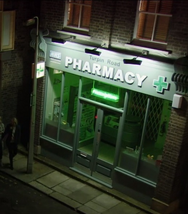 Turpin Road Pharmacy at night, seen from The Albert. Sept 2014

Kush and Masood in The Pharmacy ~ October 2014

Linda buying from the Pharmacy

Shabnam working at the Pharmacy (2016)

Shabnam working at the Pharmacy (2016)

Turpin Road Pharmacy (29 December 2016)
Add a photo to this gallery
Retrieved from "https://eastenders.fandom.com/wiki/Turpin_Road_Pharmacy?oldid=177680"
Community content is available under CC-BY-SA unless otherwise noted.