Turpin Road is a street in Walford which is accessed from Bridge Street and at the other end, George Street. The street has several businesses down it and a War Memorial. Another viaduct runs off the Bridge Street viaduct over Turpin Road.

Turpin Road was built in the 1800s as East London got bigger and bigger, as did Walford. The road was named after Dick Turpin . Turpin road houses many shops and a street market.

Turpin Road was first seen in 1985 in episode 11 when Tony Carpenter, Kelvin Carpenter, Ali Osman, Saeed Jeffrey, Naima Jeffrey and Lofty Holloway rescued Mark Fowler from Nick Cotton . It was mentioned in 1986 a few times. In 1987, Turpin Road became more prominent when a derelict pub was bought and converted into a wine bar called The Dagmar. By this time Turpin Road had a Chinese takeaway and a fish and chip shop down it. 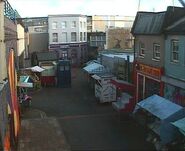 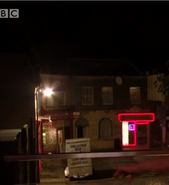 Turpin Road at night, seen from The Albert, Sept. 2014

Turpin Road near the R&R and Beale's Restaurant. January 2015.

Turpin Road near The War Memorial and The Albert. January 2015. 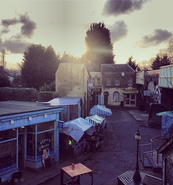 View of Turpin Road from The Albert, February 2014.

Turpin Road at night, while the tube goes past. February 2015.

Turpin Road as in 30th Anniversary

Turpin Road as in 30th Anniversary

Lofty Holloway down Turpin Road in February 1988.
Add a photo to this gallery
Retrieved from "https://eastenders.fandom.com/wiki/Turpin_Road?oldid=128819"
Community content is available under CC-BY-SA unless otherwise noted.