In 2003 Andy Hunter became the new owner and employed Pat Evans. The flat (13A Turpin Road) above the bookmaker was initially owned by Richard Cole. Sanjay and Gita Kapoor then lived here before moving to number 43. The next known occupant was Annie Palmer, followed by Simon and Louise Raymond.

In April 2001, Barry and Natalie Evans lived here very briefly. The flat then became empty for many years until 2014 when Kush Kazemi moves in. Later in 2015 he moved out to 29 Albert Square. As of 2016 the flat is empty. 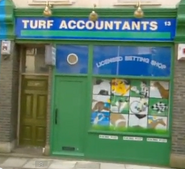 Janine and Ryan in the Bookies. 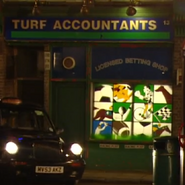 Turf Accountants at night, January 2015.
Add a photo to this gallery
Retrieved from "https://eastenders.fandom.com/wiki/Turf_Accountants?oldid=162880"
Community content is available under CC-BY-SA unless otherwise noted.