View source
watch 03:36
Wiki Targeted (Entertainment)
Do you like this video?
Play Sound

Sean Andrews
Trevor Morgan made his first appearance 21 December 2000 and final appearance 1 November 2002. He is portrayed by Alex Ferns.

A violent, aggressive, deceitful character, Trevor Morgan made life hell for his long-suffering wife Little Mo. The smooth-talking monster from north of the border might have seemed like a force of nature, but he was nothing more than a coward. Which Little Mo realised when, at the end of her rope, she took matters (and an iron) into her own hands. Even then, Trevor wouldn't lie down and returned to terrorise the Slater clan further. He held Little Mo hostage in the Slater house and set the building ablaze. Little Mo was rescued, but Trevor died in the resulting blaze; with fellow neighbor and Sharon's fiancé Tom Banks also perishing whilst attempting to save Trevor after helping Little Mo escape. The memory of his chilling stare haunted the Square long after he was burned to death.

Trevor Morgan is first introduced as the abusive husband of Little Mo Slater, when she agrees to return to him in December 2000 following a period of separation. Trevor promises to cease his violence towards her but soon resumes his abuse, often beating and humiliating her. He is regularly apologetic after attacking her but continues to isolate her from her family, especially her sisters Kat and Lynne.

One of his first scenes of violence towards Little Mo came in October 2001, when he suspected that there was friction within Little Mo's family and she refused to tell him what was happening. He then burnt her with an iron, and a few days later managed to intimidate her into admitting that Zoe was Kat's daughter and not her younger sister, as a result of her being sexually abused by their uncle Harry when she was a teenager.

When Trevor discovers Little Mo plans to attend her sister Lynne Hobbs's wedding in late 2001, he rapes her as a punishment. When she arrives late for Christmas dinner, he pushes her face into her plate and forces her to eat the remains from the carpet. Hours later, he beats Little Mo up after discovering her contraceptive pills which she had secretly been taking to avoid becoming pregnant by him.

Little Mo's family constantly implore her to leave her husband, despising his treatment of her. Trevor frequently rows with her sister Kat and is attacked by her father Charlie when he learns that Trevor burned Little Mo's hand with an iron. When Little Mo finally leaves Trevor just after Christmas 2001, when she discovers he deleted a message from Zoe, he tries to win her back. She resists, and he becomes violent, attempting to rape her again. Mo hits Trevor over the head with iron in self-defence, knocking him unconscious. Mo believes she has killed him, but when she and her family return to dispose of Trevor's body, they find out he has gone. Trevor, meanwhile, is admitted to hospital and when he recovers, he reports Little Mo to the police and has her charged with attempted murder, although she is released on bail until the trial in April 2002.

Despite strong evidence of domestic violence, corroborated by Trevor's mistress Donna Andrews, the father of his baby son, Sean, the jury at her trial find Little Mo guilty of attempted murder, and she is sentenced to eight years in prison. Following Little Mo's imprisonment, Donna ends up in the hospital as a result of Trevor's abuse. Kat cares for Sean, but Trevor arrives at the Slater family home, determined to take his son. When Kat stands in his way, Trevor attacks her, knocking her to the ground. The police arrive and arrest him, but Trevor makes a deal with Kat, agreeing to retract his statement against Little Mo in return for Kat not pressing charges against him. Little Mo is subsequently released from prison on appeal. Little Mo begins dating Billy Mitchell, but Trevor again returns in an attempt to win her back. While he is dating Sam Mitchell, he harasses her, beginning a campaign of intimidation which culminates in him taking Little Mo and his son hostage in the Slater family home attempting to kill them all in a house fire, but Little Mo stands up to Trevor by saying she is not frightened of him. He had already tracked his former mistress Donna down to her new address in Swindon, having beaten her up and snatched their son before heading back to Walford.

He threatens to start the fire, but she lights the match saying he does not have the guts. He grabs Mo, causing the game to drop and a blast to start. Little Mo and Sean are rescued by her neighbour Tom Banks; however, when going back for Trevor, both men are killed when the house explodes.

Little Mo begins to plan a funeral for Trevor but is convinced by Donna that she should be mourning Tom instead. This leads to her family and Billy growing unhappy with Little Mo's decision, as they constantly remind of all the treatment Trevor has inflicted upon her. However, when she attempts to get rid of his ashes, she says to Kat that she does not want to scatter them - as it is an act of remembrance; it soon becomes clear that Little Mo wishes to rid Trevor of her memories for good, reconciling with Kat in the process since Kat becomes proud of her sister again. Later on, she tells Billy in the café that she saw a new chapter of her life and the doors to her previous one closing when the curtains closed on the coffin. 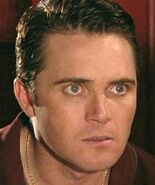