Unnamed son
Tracey is a long-standing Albert Square resident, and the bartender at The Queen Victoria.

Portrayed by Jane Slaughter, Tracey is the longest-running female character in the show, though she is mainly used as a background character (but still has some lines every now and then).

Tracey is a barmaid in The Queen Victoria pub. Since 1985 she worked on the Flower Stall and 1989 and onwards she worked in the Queen Vic. Her existence is largely to provide somebody to man the bar while one of the main characters resolves disputes, arguments or disagreements, or tends to the main plot of the episode. Despite featuring on the television programme frequently, and occasionally having a line to say, her surname and most of her details are unknown. She has also featured in a few minor storylines.

It has become a point of amusement amongst EastEnders fans that so little is known about the character and speculation is ongoing as to whether she will take a lead role in any future storylines. Weekly magazine Inside Soap run a regular feature commenting on Tracy's brief appearances, dubbed 'Tracey Watch'. They refer to her as "our fave barmaid", making observations such as: "The drinks are on Trace this week - she had an actual line! Ker-ching! Screen time: A brief, but intensely powerful, two seconds." A 2010 video on the official website of EastEnders spin-off EastEnders: E20 features the character Fatboy giving his "Survival Tips in Walford!", one of which is to not talk to Tracy, as "she goes on, and on, and on, and on." In 2010, Slaughter said that it would not make sense to make Tracy into "this talkative, all-singing, all-dancing person with a fully-fledged family and surname."

As well as being a barmaid, Tracey owns a flower stall on Bridge Street Market. Her stall is regularly robbed by new characters who steal flowers for people they are meeting. She employs workers, whilst she does shifts in the pub, including a woman called Ina and Jean Slater. Tracey was good friends with Debbie Bates, and is godmother to her daughter Clare. Tracey is often seen to be pleased at the prospect of additional overtime in The Queen Victoria when a Mitchell family wedding or other event is planned as she could always do with extra money.

On 25 May 1993, Sharon Mitchell told Nigel Bates that she will be late for his birthday party as she would be attending a hen party, which Grant Mitchell confirmed was because Tracey was getting married. After Nigel met and kissed Debbie during his birthday party, he asked Tracey where Debbie was: she replied that she left in a cab, but really liked Nigel and thought he was sweet.

On 14 April 2003, Tracey has a one-night stand with Dennis Rickman, the adoptive half-brother of former pub owner Sharon Watts when he arrives in Albert Square, despite the fact that she is married. The day after, he returns her knickers to her publicly over the bar. In 2005, Sam Mitchell breaks into the pub with a crowbar and Tracey discovers her, asking her to leave. Sam knocks Tracey out with the crowbar and drags her, unconscious, into the bathroom, locking her in. She goes downstairs to unearth the body of Den Watts who is buried in the basement, and when the police arrive, Tracy is comforted by Little Mo Mitchell. After Sam is released from prison on bail she apologises to Tracey, but Tracey appears shaken by the ordeal and scared of Sam.

On 7 August 2008 , Tracy opens up when Sean Slater questions why she is so quiet. She says she wants to keep herself to herself because she thinks that the Mitchells are all "stark raving mad" and that she does not fear any new barmaids as she had seen them come and go but she knows that she will always be behind the bar. She goes on to say that whoever lives in the pub is "cursed" in her opinion and that they will never be able to live happily together.

In March 2009, Archie Mitchell makes Tracey a cleaner at The Queen Victoria, and she is pleased for the extra money. She attends Peggy's hen party and Peggy and Archie's wedding on 2 April. On 16 April 2009, Shirley Carter accuses Phil Mitchell of drinking again. However, Phil covers this up by saying that he had broken a bottle of alcohol earlier, and Tracy backs him up.

On 28 April 2009, Tracey answers the phone to Minty Peterson questioning Phil's whereabouts from the night before. Tracy tells Phil about having to talk to the bank about some money issues. Following that, Phil pressures Tracey into talking about her feelings, supposedly for him, mentioning her husband in the process. Finally, she appears again towards the end of the episode wanting to help Ben Mitchell get to school as Phil is too drunk to assist him. Phil, flirting with Tracey, tells her that her husband will not mind.

On 30 July, she phones in with a back injury, and Peggy says it was unlike her to skive so it must be serious. Dot Branning describes Tracey as the person who "sees everything but says very little."

On 8 September 2009, Peggy tells Sam that Tracey still holds a grudge against her. On 26 November Tracey covers for both Peggy and Phil when bailiffs asks for them, by pretending she is just a barmaid from an agency and does not know them. She then informs Ben he needs to tell Phil that the bailiffs are looking for him and want to repossess his car.

On 24 December 2009, Archie Mitchell and Janine Butcher take over the pub, ousting Peggy and her family. Tracey is unhappy with the way Archie and Janine treated Peggy and the rest of the Mitchell family, and the straw that broke the camel's back comes the next day when Janine tells Tracey to put some tinsel in her hair and asks her to keep an eye on the Christmas dinner. Tracey leaves a note saying "Gone fishing", implying that she resigned. The next day, Tracey is present when Ronnie is arrested on suspicion of Archie's murder, and looks shocked. She also attends Jean's party on the 11th.

On 18 January 2010, Tracey appears behind the bar in a non-speaking capacity for The Queen Victoria's reopening. On 22 January, the pub's new owner, Roxy Mitchell, gives Tracey a warning for arriving two hours later, but Peggy explains that she asked her to come in late as she has done a lot of unpaid overtime recently. Later, Roxy sacks Tracy because she wants the pub to have younger bar staff. Peggy demands that Roxy beg Tracey to come back for the evening shift as workers like Tracey are 'gold dust'. Peggy tells Tracey on the phone that she is not sacked but Tracey hangs up. Tracey decides to take Roxy to an unfair dismissal tribunal, so Roxy says she will audition a new barmaid, giving Tracy a chance but making sure she loses. However, when Roxy realises she does not know how to run a pub, she gives Tracey her job back. Tracey suggests a curry night, and Roxy is happy to leave Tracy in charge of it, saying it is the most she has ever heard her speak. On that same day, Viewers found out that Shirley Carter and Tracey are good friends.

After the Vic burnt down, she got a job in the chip shop, which she then quit when it was rebuilt.

On 14 January 2011 , Tracey appears behind the bar, questioning landlady Kat Moon's decision to reopen the Vic, following the 'death' of her baby and offering to cover while Kat takes a break. Kat asks if she scares Tracey, adding she sometimes scares herself. Tracey jokingly responds that she wouldn't like to be on the receiving end of Kat's harsh tongue. Kat questions how Tracey leads a normal life, serving in the Vic and going home to her husband and tells her she wished she had her life. She then proceeds to enquire about how her son is, the first mention of Tracey's children in the programme. Tracey sadly replies he is living with his father, implying Tracey is divorced from his birth father. Kat apologises and suggests perhaps Tracey needs the break more than she would, but Tracey laughs off the suggestion insisting she prefers to keep herself busy.

In December 2013, the Carter family - the new owners of The Queen Vic - tell Tracey she has lost her job as they want to run a family business. Shirley overhears this and explains to Mick and Linda that Tracey is the heart of the pub and that she shouldn't be fired because she's been working there for years. When the Carters face troubles with the barrels in the barrel store, they apologise to Tracey and ask her to return to work. On October 7 2016 she attends whitney's hen party.

In April 2017 Tracey got sacked from her job at the Queen Vic by Woody Woodward the new Bar Manager, after people complaining about her firing Vincent Hubbard runs over to her and offers her a job.

On 17 February 2020, Tracey revealed to Mo Harris that she and Phil Mitchell slept together.

As she did not like the way she was treated by Janine and Archie, it was said, that she could have been the killer. She was on a poll, on the Eastenders Official Website, along with other suspects, on who did kill Archie. Mo Harris, who does bets on who killed Archie Mitchell, pointed out that Tracey could have killed him, and gave her the name, "The Silent Assasin". 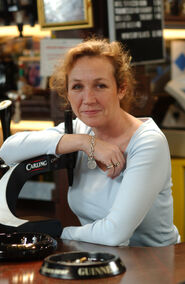 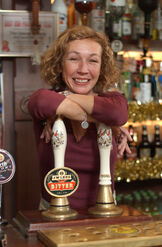 Tracy
Add a photo to this gallery
Retrieved from "https://eastenders.fandom.com/wiki/Tracey?oldid=197531"
Community content is available under CC-BY-SA unless otherwise noted.