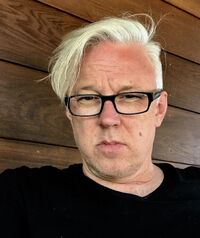 Tony Basgallop Is a British television writer who wrote numerous episodes for EastEnders from 1996 to 2001.

He worked again with David Attwood on an adaptation of William Golding's trilogy set on a British sea voyage to Australia. It was known as To the Ends of the Earth. Basgallop worked on three of its episodes after the death of its original writer, Leigh Jackson. Starring Benedict Cumberbatch, the miniseries was nominated for two awards. The first award was the Golden FIPA for TV Series and Serials, and the second was the BAFTA TV Award for Best Drama Serial. Basgallop wrote the TV movie The Good Housekeeping Guide and a year later, Confessions of a Diary Secretary. In 2008, he wrote Hughie Green, Most Sincerely for BBC Four. The movie was nominated for the Writers' Guild of Great Britain Award for Short Form TV Drama.

Basgallop was the creator of Hotel Babylon, which first aired in 2006 and ended in 2009. He wrote Moonshot in 2009. In 2010, his episode of Being Human aired. In the same year, the television drama film Worried About the Boy was released, which was written by Basgallop. Rachel Cooke, writing in the New Statesman questioned whether he intended his script to be as funny as it turned out. Basgallop wrote three of the episodes of Sirens on Channel 4, all airing in 2011. In 2012, he wrote Inside Men.

In 2013, he wrote What Remains, which was longlisted for the drama category of the National Television Awards. What Remains was the first whodunit that Basgallop had written; in the past, he had avoided detective dramas. The following year, two episodes of 24: Live Another Day written by Basgallop were broadcast on Fox, beginning his work in the States. He would then return for 24: Legacy in 2017. He has also written for Outcast, the American version of Resurrection and Berlin Station.

Retrieved from "https://eastenders.fandom.com/wiki/Tony_Basgallop?oldid=149288"
Community content is available under CC-BY-SA unless otherwise noted.