Freddie Mitchell
Tommy Alfred Charles Moon born on the 30 December 2010 is the son of Kat Slater and Michael Moon however Michael only showed any interest in his daughter Scarlett whereas Kat's husband Alfie loved Tommy and brought him up as his own.

Tommy was born 30 December 2010. In the following episode to Kat is taken to hospital and leaves her father Charlie Slater to look after Tommy. However, Charlie joins a party downstairs in The Queen Victoria public house. Meanwhile, Ronnie Branning discovers that her own son, James Branning, who was born on the same day as Kat's, has died of Sudden Infant Death Syndrome and desperately tries to get help. When she hears Tommy crying, she sneaks into The Queen Victoria and decides to swap the children. Ronnie Mitchell eventually regrets her actions but by the time she decides to swap them back, James has been found by Alfie and Jack has returned to the country and meets Tommy, thinking he is James. When Kat sees the baby in hospital, she refuses to believe it is Tommy as he looks different, but Alfie convinces her it's because he has died. When a midwife visits Ronnie, she is surprised at how quickly James' club foot appears to have gone. Ronnie is denied access to the funeral by Kat but goes anyway, hiding behind a tree. She later realises she has to put an end to the situation and takes Tommy back to Kat during the wake. Ronnie's attempts to explain that the baby is Tommy are all misunderstood and Kat demands that the baby be taken away from her. Ronnie continues to care for Tommy but starts behaving erratically. She later returns to the hospital where she gave birth and meets her midwife, Diane McLean, and realises she has to give Tommy back to Kat immediately. She tells Jack that the baby is not his son, and then explains to Kat what happened on the night James died. Kat refuses to believe it but takes Tommy, while Ronnie hands herself into the police.

Jack says an emotional goodbye the next day as he hands Tommy over to social services. Alfie is interviewed by a social worker, but Kat leaves the hospital unable to cope. However, Jean Slater tells Kat that it is a miracle that Tommy is alive, so Kat returns to the hospital to be interviewed, and they are reunited with Tommy. Although Kat struggles to bond with Tommy at first, and refuses to say his name, she soon adjusts and she and Alfie have Tommy christened; his godparents are Jean and Ian Beale. However, Alfie and Kat end their marriage and they share custody of Tommy. Michael tells Tommy that he is his real father, angering Alfie, though Tommy is still too young to understand. Michael died in November 2013 after being stabbed by Janine Butcher, the mother of his daughter Scarlett Moon. Later that month Kat and Alfie reunite. In 2014, Kat gives birth to Tommy's twin brothers Bert and Ernie Moon. Kat is badly burnt in a fire and after she becomes depressed, separating from Alfie, which affects Tommy negatively. Kat eventually reunites with Alfie. They win a million pounds on a scratchcard and depart for a new life in Spain. The family reappear in 2016 after Stacey Slater gives birth to Arthur Fowler. During this time Kat discovers that Tommy has an older brother, Luke, and his grandfather Charlie dies of a heart attack. His parents then decide they should go back to Spain, once again leaving Albert Square.

After Kat returns to Walford, is later revealed that Alfie is still in Spain with the kids after an incident that happened while Kat was looking after them. Kat had sex with a Spanish man upstairs and left the kids playing downstairs, Tommy boiled the kettle and water accidentally went on Bert. On the night of the Royal Wedding, Kat gives her cousin Hayley Slater a makeover, alongside her nan Mo. Jean passes Hayley an umbrella on her way outside as Kat and Mo plan to tip water on her. Hayley then goes outside to confront them and they stop. She then heads to a hotel room outside of Walford where it is revealed that Kat's husband Alfie Moon is the father of her unborn child after they had a on night stand. The pair talk and Alfie asks about Kat because Kat's children need to see their mum as Aflie is currently raising them after a fall out with Kat - which has made Kat refuse to even see her boys. Alfie tells Hayley he loves Kat but Hayley tells Alfie she thinks the baby is a girl and she could boss her big brothers around and Hayley will raise them as her own. However Alfie replies by telling Hayley that Kat is the boys' mother, not her. Hayley gets mad and wants to have an abortion but Alfie tells her not to but later changes his mind after Hayley talks him round. Alfie gives her the money and the next day Hayley makes an appointment at the hospital for a termination. Hayley then gets drunk and turns up late to her appointment, which makes them refuse to see her. She then makes a new one but changes her mind after Kat tells her she's a good person really. Hayley later gives birth to a baby girl named Cherry Slater.

In April 2020, during Kat's temporary exit, Tommy confides in his mums boyfriend Kush Kazemi, telling him about his bullying at school. He tells Kush he often gets called names at school and he now hates his life. Tommy is also diagnosed with dyslexia. Due to this, Kush asks Isaac Baptiste to tutor Tommy outside of school and the two strike up a friendship. It is also said that Tommy, Bert and Ernie like to lock Cherry in cupboards for fun.

Kat And Alfie and Tommy Moon 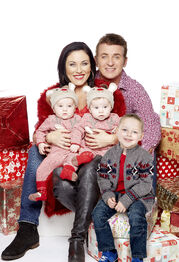 Kat and Alfie Moon with their Children

Tommy and the Twins as they leave for Spain (2015)

Tommy Moon Passport
(4 January 2019)
Add a photo to this gallery
Retrieved from "https://eastenders.fandom.com/wiki/Tommy_Moon?oldid=198850"
Community content is available under CC-BY-SA unless otherwise noted.