Hit by a car driven by Frank Butcher

What Links Here
Tiffany Dawn Mitchell (née Raymond) was the daughter of Terry and Louise Raymond, brother of Simon and mother of Courtney.

Tiffany arrives in Walford in January 1995 to visit her friend Bianca Jackson. After finding work as a barmaid at The Queen Victoria public house, Tiffany moves to Walford. She clashes with landlord Grant Mitchell, and one night, their disagreement leads to passion. A few months later, she reveals to Grant her father caused her to miscarry after she got pregnant at 14, he comforts her and they have sex again. When sober, they both agree not to repeat this and Tiffany begins dating Tony Hills. They move in together and the relationship blossoms until Tiffany discovers she is pregnant. Although she knows there is a possibility her child is Grant's, she decides to claim her baby is Tony's. It is not until Tiffany discovers Tony kissing her brother, Simon Raymond, that she realises Tony is bisexual and has been having an affair with her brother. Devastated, Tiffany tells Grant he is her baby's father. Determined to raise the child, Grant whisks Tiffany away to Paris in November 1996 for a quick wedding. Tony refuses to believe Grant is the father and subsequent fights ensue, with Tiffany staunchly denying Tony has claim to her unborn baby.

Living with Grant proves difficult for Tiffany. Grant refuses to allow Tiffany to socialise or drink alcohol, fearing that it may harm his unborn child. After Grant witnesses Tiffany having a cocktail, he is incensed. Tiffany threatens to leave him and Grant almost attacks her but is stopped by Lorraine Wicks. Lorraine consoles a distraught Tiffany, who breaks down and admits that Grant may not be her baby's father. Lorraine tries to convince Tiffany to tell Grant the truth, but Tiffany decides against it and continues to keep up the pretence. Meanwhile, Lorraine begins to make her real intentions towards Grant clear. On Christmas Eve 1996 she and Grant kiss and on New Year's Eve, Lorraine informs Grant there is a possibility Tiffany's baby is not his. Grant reacts by throwing a pregnant Tiffany out. Their separation allows Grant to embark on a relationship with Lorraine, destroying Tiffany.

Tiffany gives birth to baby Courtney by caesarean section in March 1997, and for a moment Grant softens towards his wife. However it does not last and he is soon denouncing that the child is his. Tiffany is forced to get a paternity test, which reveals Grant is Courtney's father. Tiffany is allowed to stay at The Queen Vic so Grant can keep his daughter close. Still in love with Grant, Tiffany begs Grant to rethink their separation; he initially responds by threatening to sue her for sole custody of Courtney but changes his mind following Lorraine's departure from Walford. Not long after their reconciliation in August 1997, Grant and Tiffany renew their wedding vows and bond on a romantic trip to Paris. However, by 1998 he and Tiffany are rowing again. During a heated argument, Grant hits his mother, Peggy Mitchell, who is trying to stop Grant's violent outburst on Tiffany. Following this, Tiffany moves out of the Mitchell residence and in with her mother, Louise.

Grant attempts a reconciliation with Tiffany, but she decides she wants a divorce. She grows close to police officer Beppe di Marco, who has fallen for Tiffany and despises Grant for his treatment of her. Grant decides to counter their relationship by making a pass at Tiffany's mother, Louise; they sleep together. Their affair abruptly ends when Tiffany reconsiders divorcing Grant. She and Grant reunite, but months later a distraught Tiffany overhears them talking about their affair over a baby monitor. Unbeknown to Louise or Grant, Tiffany starts packing to leave Walford. She confronts Grant, telling him that she is taking Courtney and he would never see her again. She attempts to leave but in her haste she accidentally falls down the stairs and is hospitalised with a blood clot on the brain and lapses into a coma. Everyone assumes Grant pushed her and when Tiffany wakes up and is released from hospital she is quickly prompted and persuaded by Beppe to lie to police and say that Grant pushed her. This then culminates in Grant being arrested for attempted murder on Christmas Day 1998.

On New Year's Eve 1998, Tiffany makes plans to leave Walford with Courtney for Spain. While Courtney is left at The Queen Vic with Peggy, Tiffany takes it upon herself to tie up her various loose ends, firstly by disowning her mother Louise and breaking up with Beppe, whom she has never really had any true feelings for. Tiffany changes her mind about framing Grant and writes a signed confession exonerating him of any wrongdoing in her fall down the stairs. She then instructs Bianca to give it to the police after she has departed following an emotional goodbye. Unbeknownst to Tiffany, however, Grant has already been released from prison on bail. He returns to The Queen Vic, moments before Tiffany herself returns to claim Courtney. Having been told by Tiffany only hours earlier that she is planning to leave the country, Grant snatches Courtney and flees. Hysterical and frightened, Tiffany pursues them, which results in her running straight into an oncoming car, driven by Frank Butcher. A helpless crowd watch as she dies at the scene. Tiffany is cremated and her ashes are scattered at Peacehaven. 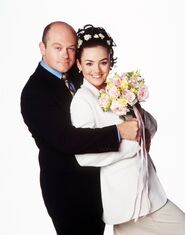 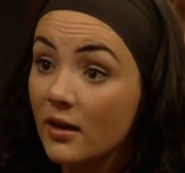 Tiffany lays Dead outside of The Queen Victoria