EastEnders Wiki
Register
Don't have an account?
Sign In
Advertisement
in: Businesses, Community Buildings, Facilities in Walford,
and 2 more

Kathy Beale
Kim Fox
10 Turpin Road has housed various businesses throughout the years, including a furniture store, a catering business, a bric a brac store, and a hair salon. The building currently houses The Prince Albert, a gay bar, owned by Kathy Beale.

Wine bar
The Dagmar was owned by Gladstones Brewery. James Willmott-Brown took on the tenancy in 1987 and in May of that year he had the place renovated into a modern wine bar (with a disco in the side-room) as a rival to the Queen Vic. His intention was to repeat this formula with other local boozers once The Dagmar was up and running. Angie Watts moved in and became chief barmaid in an attempt to spite Den, and soon recruited Simon Wicks after he was sacked from The Vic. The bar was initially popular, but suffered two graffiti attacks in October 1987 with 'Yuppies Out' being sprayed across the frontage. Angie quit at the end of the year, claiming a dislike of the yuppie clientele and missing The Vic. The Dagmar began to lose business due to competition from the Vic and the Strokes Wine Bar, as well as Walford's residents not catching on to the upper class establishment. Other bar-staff included Barry Clark, Lofty Holloway, Kathy Beale and on Near Year's Eve 1987 the never-before-seen Wendy from The Chip Shop stepped in as emergency cover after Angie quit. Mary Smith was also employed as a cleaner, with Rod Norman filling in when ever she was away. In July 1988, following the rape of Kathy Beale by James, The Dagmar was burned down by Brad Williams on the orders of Den Watts.

The Dagmar at night

Furniture store
Furniture Bargains opened in 1988 shortly after the fire of The Dagmar. However, the business failed after one year.

Catering
In 1991 Ian Beale leased the site and went into partnership with Hattie Tavernier converting it into a catering business. Chefs included Steve Elliot and Joe Wallace (who left in a furore when Ian discovered Joe had HIV). Ian was forced to vacate the building on 10 June 1993 due to unpaid rent, following a combination of a drop in business and a loss of £1500 when one of his business associates went bust without paying him. This was compounded by an estimate of £3,000-£4,000 for an essential upgrade to the kitchen's extraction system after Richard Cole reported Ian to the Environmental Health Department. The Meal Machine premises were boarded up and Ian scaled down the business to run from his own kitchen.

Following the closure of Beale's Market in 2000 the premises were once again re-opened as The Meal Machine in 2001, this time owned by Mel Owen.

Bargain store
Bella's Bargains was a bargains store that opened af the failure of Beale's Market.

Restaurant
In 2001 Mel Owen returned to the Square, she bought the business and resurrected the Meal Machine with Ian as a partner. Following her arrest in 2002 for drug trafficking Mel signed the Meal Machine over to Laura Beale as protection.

Nail bar
Sophisti-Kate's was a nail bar run by Kate Mitchell, bought for her by her husband Phil. Kate worked beside Chrissie Watts, who ran a hair salon upstairs. The salon had sustained fire damage and was later closed when Kate re-joined the police and left the Square in 2005.

Hair salon
Booty was a beauticians run by Tanya Branning. It was bought for by husband Max. Tanya ran the salon until December 2009 when the salon was repossessed and sold on.

Hair salon
Roxy's was a beauticians owned by Roxy Mitchell, which she had brought in a bidding war with her sister Ronnie. Roxy hired Chelsea Fox, Jodie Gold & Kim Fox. However in 2011 Roxy was unable to run the salon and the R&R, so she sold the business back to Tanya.

Hair salon
Tanya bought the salon back again in 2011 and named it Booty once more. She continued to run the business until her departure in 2013.

Hair salon
The salon was renamed Beauty after Sadie Young purchased it from Tanya and renovated the premises. She hired Lola Pearce & Poppy Meadow. In 2014 she sold the 99 year lease of the salon to Sharon Rickman & Phil Mitchell who then converted it to The Albert.

The night before the opening of The Albert Johnny took a group of people for Lauren's 20th birthday party as Johnny had the keys to the Albert, Then later on Johnny gets fired by Sharon but then he gets the job back as Sharon felt sorry because he said that nobody ever cares about him and he always does everything wrong. On the night of the opening Sharon gives him another chance as the night before Whitney kissed him, Sharon said that Johnny could take a 4 minute break after he said can he have a 5 minute break as he saw Whitney go out of The Albert upset, he followed Whitney and then saw The Queen Victoria Publichouse was on fire. Johnny went back to The Albert and told Mick and Linda that there Vic is on fire and never went back. 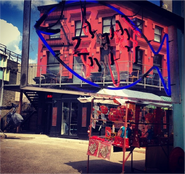 The Albert seen from inside Beale's Plaice

The Albert at night

The Albert at night 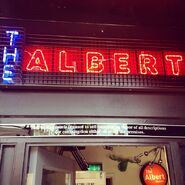 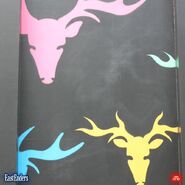 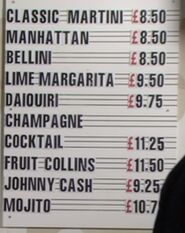 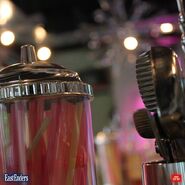 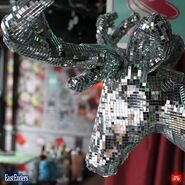 Disco antlers inside the Albert 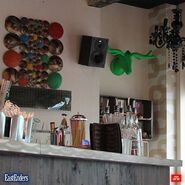 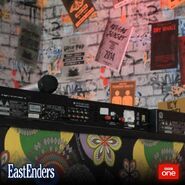 The Albert Contract signed over to Vincent Hubbard (2015)

In order to spite Phil, Vincent - who had become the bar's biggest shareholder - renamed The Albert Pearl's Bar after his newborn daughter, Pearl Fox-Hubbard.

When Phil realised what Vincent had done, he responded with physical violence, causing Vincent to change the name back to the Albert. Ronnie Mitchell begins working there in October 2015 as she wants excitement. Sharon sells her share in March 2016 in order to pay off her Dad, Gavin Sullivan.

When Kathy Beale discovered her necklace is worth £100,000, she sells it, uses the money to buy the lease of the Albert, renames its The Prince Albert and turns it into a gay bar. Kathy asks Tina Carter to become the manager because she has a knowledge of the 'gay scene' - she remained the manager until her death in 2020. Mila Marwa was hired briefly before Tina’s death, however she later left the square with Kioni and Iqra Ahmed. After this, Lewis Butler is hired