Hillner & Barrell Estate Agents
The Argee Bhajee was an Indian style food restaurant, run by the Masood family. 88-90 George Street was knocked into one building in 1986, when it became an Italian restaurant called Giuseppe's, run by the di Marco clan.George Palmer provided the finance for this Italian restaurant, but it was family head Rosa di Marco who pulled the apron strings.

When the di Marcos made the move to Leicester, Giuseppe's closed down. However, it was later resurrected as the garish Indian restaurant imaginatively named The Argee Bhajee and even had it own stall on Bridge Street called The Argee Bhajee To Go. It was owned by and operated by the Masood family. It was closed when the roof collapsed on Syed Masood and other party guest, however, it was then re-opened but ultimately closed again due to debt issues.

In 17 March 2015 Masood went to the bank to arrange a bank loan to buy the lease of The Argee Bhajee but the bank would not give him the loan. The building has remained derelict for a few years as of 2018.

Prior to 1998 when they were knocked through for Giuseppe's Italian Restaurant they were two separate properties.

A hardware store owned and operated by Ted Hills.

A print shop owned by Annie and George Palmer as a cover for their illegal activities.

A shop that gave pets a pedicure.

Giuseppe's was an Italian restaurant that sold Italian cuisine, it was set up and ran by Rosa Di Marco, assisted by Beppe Di Marco and Gianni Di Marco. 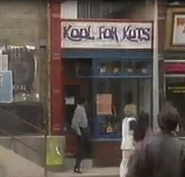 Kool For Kutz, in 1994, where Giuseppe's and the Argee Bhajee later was.

By the Letter & Homeware 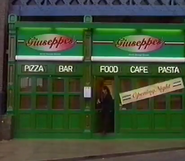 Giuseppe's opens in April 1998.
Add a photo to this gallery

Argee Bhajee collapsing
Add a photo to this gallery

The Argee Bhajee up for sale in the Walford Gazette (2015)

Advert for The Argee Bhajee Lease (2015)
Add a photo to this gallery
Retrieved from "https://eastenders.fandom.com/wiki/The_Argee_Bhajee?oldid=98619"
Community content is available under CC-BY-SA unless otherwise noted.