Transferred to another division

What Links Here
DS Terry Rich made his first appearance on 26 February 1985. He is portrayed by Gary Whelan.

Terry is a police officer that investigates the death of Reg Cox, who had died the previous week, and his death is believed to be a murder. DS Rich of the Walford CID arrives in Albert Square to conduct an inquiry.

The following week, a badge that Lofty Holloway is wearing on his jumper catches the eye of Dr Legg, who recognises it as one that he'd seen in Reg's collection of Nazi badges from the war. A few hours later, Rich arrives at The Queen Victoria where Lofty is tending bar and questions him about how he got the badge. Lofty reluctantly admits that he'd bought it from Mark Fowler for five pounds. When questioned by Detective Sergeant Rich, Mark insists that he found the badge on the street. However, on 28 March, Rich learns that Mark had obtained the badge from Nick Cotton and 'turned over' Nick's place to find the remains of Reg's collection along with other incriminating evidence. Nick Cotton then flees Walford, but is arrested the following month for the murder of Reg Cox, although he is never charged.

Terry returns in 1987 to investigate the case of the 'Walford Attacker', who has assaulted several different female inhabitants of Albert Square. In April of that year, the attacker picks the wrong victim, Debbie Wilkins, who manages to ward him off using self-defence, which leads to his arrest. Terry is impressed with the way Debbie conducted herself so he asks her if she would help him out on some police business. Terry asks Debbie to go to a French restaurant with him on an undercover operation to expose French restaurants using English waiters. Debbie agrees, but whilst on their mock date they bond and when they return to The Queen Victoria they make a dinner date for the next night to a Chinese restaurant and they are soon inseparable. Debbie's flat-mate Naima Jeffery seems to dislike Terry immensely, but this doesn't perturb Debbie, and when Terry asks her to marry him, she gleefully accepts. The following month Terry is transferred to another division, so Debbie decides to leave Walford with him. He leaves with her on 14 May 1987. Later that year Debbie wrote to Naima to tell her that she was pregnant; she and Terry married off-screen. 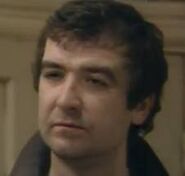