Teresa is Rosa di Marco's eldest daughter and a wild child, despite the fact she has her overprotective, big brothers Beppe and Gianni di Marcolooking out for her.

She first appears at her father's funeral in January 1998, and had recently failed her A-level exams, making her mother suspicious that she had done this on purpose, so she can stay as a waitress in the family restaurant. However, Teresa has higher aspirations than working in the family business, and so gets her own stall on the market.

Teresa also knows how to find trouble. She is caught with drugs by the police, finds out that her bisexual boyfriend Tony Hills had an affair with his ex-boyfriend Simon Raymond. Teresa also had flings with Lenny Wallace and the married Ricky Butcher. Teresa then runs away with her then boyfriend, Matthew Rose, who is suspected of murdering Saskia Duncan. When they are finally found, Matthew is found guilty and Teresa is crushed. She campaigns to get him freed, and when he is the two are reunited, but his desire for revenge on the real murderer Steve Owen scares her and they break up.

Following her sister Nicky di Marco's accusations of assault, most of the di Marcos decide to leave for Leicester and, although reluctant at first, a heart to heart with brother Beppe makes Teresa realise she needs a new start. She then joins her family and heads out of Walford. 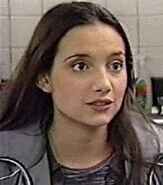 Teresa di Marco
Add a photo to this gallery
Retrieved from "https://eastenders.fandom.com/wiki/Teresa_di_Marco?oldid=157658"
Community content is available under CC-BY-SA unless otherwise noted.