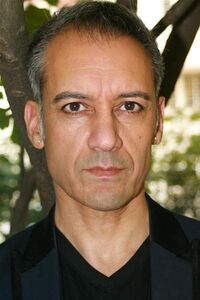 Tanveer Ghani is an actor who appeared as Rezaul Gabir in EastEnders from 1986 to 1988.

His first television role came in 1982, in the BBC TV series Angels in which he appeared as a character named Salim for two episodes - none consecutive. He then had minor in the television movie Good at Art in 1983. After that, he went on to pursue minor roles in other television series' and mini-series' in shows The Far Pavilions, The Jewel in the Crown, Mitch, Murder of a Moderate Man and Boon before landing a part in another television movie production in 1987 while juggling his career on EastEnders.

After EastEnders, Ghani went on to other productions in other high-profile shows such as The Bill, Doctors, Dracula and The Royals - which was also his last known contribution to television. However, he appears in a production which is currently under the process of being created called Badla and is set to be released at some point 2019.

Retrieved from "https://eastenders.fandom.com/wiki/Tanveer_Ghani?oldid=149751"
Community content is available under CC-BY-SA unless otherwise noted.