Syed is the eldest son of Masood Ahmed and Zainab Masood, and brother of Tamwar and Shabnam. Prior to the Masoods' arrival in Walford, Syed was estranged from his family for four years. He stole from the family business, almost bankrupting them. His father took the blame, but exiled Syed from the family. Syed moved to the north of England and worked in the property industry.

Syed resumes contact with his family when he experiences financial difficulties. Although Masood reveals his previous theft, Zainab forgives her son, and invites him to move into the family home when he is evicted for failing to pay his rent. Syed introduces his family to his girlfriend, Amira Shah, who soon moves to Walford to be near him. He begins working for his parents' catering company, and develops an attraction to his colleague, Christian Clarke. The two have sex, and Syed admits that he has had one-night stands with men before. Conflicted by his Muslim faith, Syed proposes to Amira. He continues to see Christian, whose niece Lucy sees them kissing and blackmails him. Christian and Syed declare their love for one another, but when Masood is involved in a car accident, Syed believes he is being punished and terminates their relationship. A hurt Christian tries to move away from Walford, but is unable to forget about Syed, and returns in an attempt to deter him from marriage. On his wedding day, Syed admits to Christian that he is gay and in love with him, but feels unable to come out because of his family and faith. Zainab discovers the truth, but implores Syed to go through with his marriage. He does so, but is initially unable to consummate it. He tells his mother that the thought of sex with Amira makes him feel physically sick. He wishes to confess his sexuality, but Zainab warns him against shaming the family and threatens to disown him. Syed attempts to commit to his marriage; he has sex with Amira, and suggests starting a family.

Despite his intentions, Syed resumes his relationship with Christian. Amira becomes pregnant but it was her misunderstanding and not real (but finally she will at the time she leaves, although she will not tell it to Syed). Syed intends to continue the affair, to Christian's displeasure. Syed finally reveals the truth to Amira kind of by accident and ultimately admits that he is gay. Amira's father Qadim becomes very mad at him. Amira terminates their relationship and leaves Walford. Christian is attacked by Qadim, and rejects Syed when he visits him. He calls him a coward for trying to appease his family. Syed is later told to find a new mosque to attend, and implored to leave Walford by Christian's best friend Roxy. He takes an overdose, and regains consciousness to hear Zainab telling him it would be better if he was dead. She burns his belongings and attempts to evict him from the family home, but is stopped by Masood. Syed begins attending therapy which he believes will cure him of his homosexuality, though it proves unsuccessful. Syed knows Christian still has feelings for him, but when he visits Christian, he rejects Syed again. The following day, Syed tells Christian he chooses him and needs his help, and that he is both gay and Muslim. The two move in together, and Syed is disowned by his parents.

Syed becomes Christian's personal assistant and finds a new mosque. His parents help him escape from a fire, but they return to ignoring him in the aftermath. Trying to move on with his life, Syed starts his own massage business. He discovers that his father almost had an affair, and threatens to tell his mother, but decides against it. He is hurt when Christian kisses another man at a party, but is able to forgive him. They decide to have a child, although Syed is at first against the idea. A drunken Roxy offers to be the surrogate mother and although Syed tells Christian that it is happening too quickly, Roxy has already impregnated herself with Christian's sperm. The insemination is unsuccessful however. Syed rents a room at Roxy's salon for his massage therapy business, but steals her client list and plans to go into business with Roxy's manager, Tanya Branning. He and Christian attend Tamwar's engagement party together, much to the disgust of his parents. The roof of their restaurant collapses and knocks Syed unconscious, Christian and Yusef Khan come to his aid. Zainab is led to believe his condition is critical and visits him in hospital, but rejects him once he is discharged. Zainab visits Syed after being urged to by Yusef, but she leaves after a while admitting it was a mistake. However, when Masood lets Zainab down, she contacts Syed and they meet in a café. Masood discovers them but Syed says he cannot stop them seeing each other. Syed confronts Zainab and Masood in The Queen Victoria, telling them that if they do not accept Christian as Syed's lover then there is nothing more to say. Syed calls Masood a hypocrite for gambling and tells Zainab that they are in no position to judge him. He then tells them to live their lives and he will live his. Eventually, Syed and Zainab make amends. Christian and Syed try to pursue an adoption and Christian finds a new flat for them. However, Syed almost changes his mind and the couple split up until Syed realises that he does want a child. Syed tells his family he and Christian are engaged at a family meal, but they do not take the news well.

Syed decides to find Amira so he can get a divorce, but has trouble finding her and Christian worries about Qadim getting involved in their lives again. It is revealed Amira is practically being held hostage by her father and that she had Syed's baby, a girl called Yasmin. Eventually Amira comes to Walford and wants Syed to be part of Yasmin's life as long as Christian is not part of it. Syed and Christian agree that their relationship comes first and they will go through the courts to gain access. However, when Christian is asleep, Syed sneaks out to meet Yasmin. Syed continues to secretly see Yasmin and Amira, but when Christian learns of this, he confronts Syed and declares that Syed has to choose between him and the baby. However, he relents and gives Syed his blessing to see his child. Once Zainab knows about Yasmin, she and Amira both try to manipulate Syed into spending more time with his daughter, at the expense of Christian. Christian reveals that he had a paternity test performed, which proves that Syed is not the father of Yasmin. Syed is devastated, but Amira continues to claim that he is the father. Syed doubts Christian, believing that he may have falsified the test. However, it emerges that it was Yusef who falsified the paternity test. Syed and Christian then let Amira and Yasmin stay with them, as they have nowhere else to go. When Christian is falsely accused of touching 15-year-old Ben Mitchell, Syed doubts Christian again, leading to Christian breaking up with Syed and leaving Walford. Amira tells Syed that she has a business opportunity in Pakistan, and invites Syed to join her and Yasmin there. Syed is initially reluctant, but after Christian's sister Jane Beale says that Christian is unlikely to reunite with him, Syed considers the move. Christian returns to Walford at Christmas, and when he sees Syed and Amira, he mocks them for behaving like a couple. However, Syed is determined to win Christian back and insists on a divorce, though Amira refuses, so he brings Qadim back to convince her. Christian and Syed then reunite, and Amira agrees to a divorce, but tells Syed that she will not leave Walford with Qadim. Amira then starts a brief relationship with Anthony Moon, and Syed and Amira start their business. However, Amira soon tires of Walford without her husband, and leaves. Syed is relieved when Christian finally reconciles with the Masood family, and Zainab invites Christian to a family dinner and to the mosque. 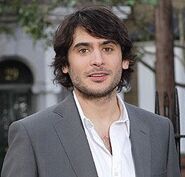 Promotional photo
Add a photo to this gallery

Retrieved from "https://eastenders.fandom.com/wiki/Syed_Masood?oldid=198583"
Community content is available under CC-BY-SA unless otherwise noted.