Suzy first appears in 1996 for April's wedding to her fiancé Nikos, along with her children, Rebecca and Kevin. Nikos jilts April at the altar, so Suzy's sister Carol Branning and her boyfriend Alan Jackson marry instead. After the wedding, Suzy is not heard of until October 2007, when it is revealed that she is unable to attend her nephew Bradley’s wedding to Stacey Slater. In July 2008, Max receives a series of calls from Suzy, asking for financial help. Max arranges for his friend Phil Mitchell to take some money to Suzy at her salon, Tantasy. Suzy presumes that Phil has been sent by her ex-partner, and knocks him out by hitting him around the head with a figurine. After some heavies turn up at the salon, Phil takes her to his home, The Queen Victoria public house, and she thanks him for saving her by sleeping with him. She later returns to see Phil, during Roxy Mitchell's wedding reception. Phil is delighted to see her, and they share a kiss. Phil says she can stay the night. Suzy meets Max, asking him if she can stay with him. She buries something in the allotments and the following day, Patrick Trueman accuses her of stealing the potatoes he was growing. She assures him she did not, despite looking suspicious.

Suzy takes the spare room at Dot Branning's house and looks after Tanya Branning's salon while she is away. She later asks Phil to dig something up for her, revealed to be a bar of gold. Phil then moves in with Suzy, but his son Ben takes a disliking to her. Phil cheats on Suzy with Shirley Carter, which Suzy discovers. She tells Phil she is pregnant but it is a lie and she plans to con him out of his money to pay her ex-boyfriend Ahmet. Phil proposes to Suzy who accepts. Shirley and her friend Heather Trott discover that Suzy is still buying tampons and realise she is not pregnant. She lies to Phil that she had a miscarriage. When she reveals that she lied to Phil, they break up. However, Archie Mitchell uses Suzy to plant DNA results in a Christmas cracker, showing that Sean Slater is not the father of Roxy's baby. Suzy leaves before Sean finds the results. Phil discovers that £10,000 is missing and blames Suzy so he and Shirley go to find her. In the Queen Victoria, Shirley trips Suzy and she is knocked out. Shirley takes the money back and when Suzy comes around, she burns it, telling Suzy to get out. Suzy then leaves Walford. 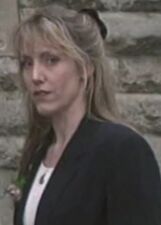 Suzy Branning played by Julie Christian-Young.
Add a photo to this gallery
Retrieved from "https://eastenders.fandom.com/wiki/Suzy_Branning?oldid=207757"
Community content is available under CC-BY-SA unless otherwise noted.