Dawn initially found it hard to bond with Summer as she still wanted to go out partying. However during a trip to Brighton in August 2007 with Summer and Garry Hobbs, Dawn accepted responsibility for her daughter and vowed to become a proper mother. As January 2008 approached, Summer saw her mother begin a relationship with builder Jase Dyer, and began modelling for catalogues after Dawn took her to an audition.

Dawn wanted Summer to be a model and entered her for the "Beautiful Baby" competition at the Queen Vic on her first birthday. Dawn put fake tan on Summer for the competition, which she later had an allergic reaction to, and was named runner-up at the end of the day.

On Summer's birthday in June 2008 May Wright returned to Walford, intent on kidnapping Summer from her family. May was married to Summer's father, Rob, when she was conceived during an affair Rob had with Dawn and May, unable to have children, had never quite gotten over it. Upon seeing Summer in fake tan, May branded Dawn a terrible mother before attacking her and her brother Mickey and then trying to make her escape with Summer, who she called Sophie. However, Mickey rescued Summer and locked May out of the bedroom, leaving May trying to break down the door, screaming "Sophie". Devastated, May went down to the kitchen and committed suicide by blowing the house up. Mickey then tried to throw Summer out the window but he dropped her when he passed out and Jase caught her. Dawn then pushed Mickey out of the window but passed out, so Keith rushed into the house and rescued her. All three were taken to hospital. Summer was declared healthy once checked on by doctors.

In July 2008, it was revealed that Jase had adopted Summer seen as Dawn had left the father section of her birth certificate blank.

More tragedy struck for Summer's family when her adoptive father, Jase, was murdered by members of a gang he used to run about with, on 26 August 2008. Dawn, Summer, Jase and his son Jay had been living at 89b George Street but the flat was cordoned off by police so Dawn and Summer moved in with Garry whilst Jay went into care. However, being in Walford proved too much for Dawn and at the beginning of September she and Summer went to live with their family in the Cotswolds. Dawn returned to Walford on 6 October for Jase's funeral, leaving Summer with her grandmother Rosie, and was adamant that she was returning to the Cotswolds in order to build a new life there with her daughter. However, after much persuasion from Garry, Dawn decided to stay in Walford and two weeks later, mother and daughter moved in with Garry and his flatmates Minty Peterson and Callum Monks.

However when her mother embarks on an affair with her boss Phil Mitchell, and after this is revealed to Garry he decides to giver her another chance and they leave Walford together by sailing on a boat.

She has previously been played by on-screen uncle Joe Swash's son, Harry Swash, Maisie Nelson ,Abbie Hackworth and Daisy Fitter, but is now played by twins Isabella and Rebecca Hegarty. Along with actors Ricky Groves and Kara Tointon, the character made her final appearance on 27 August 2009. 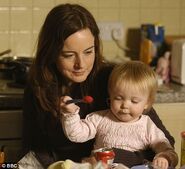 May Wright and Summer Swan (Isabella/Rebecca Hegarty, 2007–09)
Add a photo to this gallery
Retrieved from "https://eastenders.fandom.com/wiki/Summer_Swann?oldid=150141"
Community content is available under CC-BY-SA unless otherwise noted.