Killed by car explosion after crashing; he was in a car chase with Phil Mitchell after he found out he was planning to flee with his daughter Louise Mitchell along with Lisa Fowler and Mel Owen

Steven Richard Owen was the son of Richard and Barbara Owen, ex-husband of Mel and father of Hunter.

Saskia Duncan (February 1999) – Bludgeoned with an ash tray while she was strangling him.

Born Steven Richard Own on the 19th March 1965 to Richard Owen and Barbara Owen. Steve had an older sister Jackie Owen. Steve once dated a woman called Tricia. Steve gained a reputation as a nightclub owner, and lived in Soho for a time.

Steve arrived in Albert Square in December 1998 to buy The Market Cellar and renamed it e20. His obsessive ex-girlfriend, Saskia Duncan turns up to tries to come between Steve and his new girlfriend, Melanie Healy.

On 14th February 1999, Saskia comes between Steve and Mel once more and she starts to knock him about and manages to grab Steve's tie, strangling him, causing him to reach for the nearest object (an ashtray) in the office and hitting Saskia over the head killing her instantly. Witnessed by Matthew Rose he helps Steve bury the body in Epping Forest. Matthew wants to confess but Steve pressures him not to. Steve keeps Matthew in check.

A few months later, Saskia's body is found and Matthew confesses to the police and by the end of the trail, Matthew is found guilty of manslaughter instead of Steve. When Matthew is released, he takes his revenge on Steve by threatening to burn him alive but says he just wanted to make Steve suffer. Matthew then leaves the area for good, and Steve turns to drugs as a result the drugs nearly killed Steve's business partner Beppe di Marco after he took a mixture. Billy Mitchell was the supplier. Steve returns to Walford after beating his addiction and rescues Mel from Dan Sullivan and the pair start a relationship. Steve holds Dan hostage with a gun and tells him to leave Walford or he will kill him.

On 1st March 2001, before marrying Mel, Steve finds out that Mel had a one night stand with Phil Mitchell and on the night of their marriage, Phil is shot and a month after that, Jamie Mitchell begins to suspect that Steve shot Phil, but when he returns from hospital, Phil discovers that Lisa Shaw shot him and decides to blame Dan.

In August 2001, Mel is kidnapped by Dan after Phil frames him and Mel is informed by Dan of Steve's criminal activities, like secretly buying the Queen Vic in partnership with Den Watts's adoptive daughter, Sharon Watts. After Phil rescues Mel, she burns down the E20 and leaves the square to get back at Steve for his lies.

After the E20 club burns down, Steve organises a robbery to help gain his financial problems with the help of Billy Mitchell and some old friends, who set out to rob a wealthy businessman named Alan. Steve attempts to trap Alan's mistress Jan Sherwood, and after having a one night stand with her, Steve and Jan split the money that was stolen, fooling Steve's gang into believing that Jan stole all the money. Mel returns to the square and her and Steve get back together.

In January 2002, Steve and Phil continue with their feud after Steve lies to Phil by saying that he slept with Sharon. Phil brutally attacks Steve and is charged for assault.

In February 2002, Steve gets final revenge on Phil by sleeping with his sister, Sam Mitchell and plans to flee to the United States with Mel, Lisa and her boyfriend, Mark Fowler and Phil daughter, Louise. Phil finds out that Steve has got Louise and the pair have a high speed car chase and Steve crashes into two petrol tanks and Phil rescues Louise. He runs back for Steve, but hesitates, hoping the thorn in his side Steve will die in the burning car, and the car explodes into flames, killing Steve instantly.

After the funeral, Mel gives Phil Steve's ashes. Before flushing Steve's ashes down the toilet, Phil decides to scatter Steve on his mum's grave, Barbara Owen, and Phil says, 'rest in peace'. Mel was a month pregnant when Steve died, she then left Walford and have birth to their son Hunter Owen in late 2002.

In February 2018, Melanie returned to Walford after 15 years away. Billy Mitchell was asked by her son Hunter if he knew a man who lived round here named 'Steve Owen' but Billy had lied, after reminiscing about Steve, . Hunter had been told that his father was a lovely and benevolent man but found out that he killed Saskia Duncan in 1999 and framed Matthew for it.

Steve in his car just before it explodes.

Steve is shaken after Matthew has got revenge on him and left the area forever. 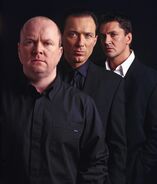 Steve is the background with Phil and their fellow nemesis Dan Sullivan
Community content is available under CC-BY-SA unless otherwise noted.