Former; regular
Steve Elliot made his first appearance 22 October 1991. He later got a job working at The Queen Vic and started dating Hattie Tavernier. He is portrayed by Mark Monero.

Steve is first seen in Albert Square in October 1991 as an old school friend of Hattie Tavernier and Sam Mitchell. He initially works as a pizza chef, but his talents are noticed by Ian Beale who quickly gives him a job as head chef at his catering business, The Meal Machine. In 1992, after much flirting, Steve and Hattie start dating. Unlike Hattie, Steve is not keen on commitment but accepts her marriage proposal on New Year's Eve 1992. Hattie makes plans for the wedding but Steve has second thoughts when he loses his job and begins to listen to Mandy Salter, who persuades him he is not ready for marriage. He decides to take a job as a chef on an ocean liner but neglects to tell Hattie that the wedding is off. Unknown to him, Hattie is pregnant; she follows him and tries to persuade him to stay but doesn't tell him that she is pregnant, fearing he would stay from obligation and not love. Steve decides to leave anyway. Hattie is heartbroken and has a miscarriage soon after.

In 1994, Steve returns to Walford and hopes to reunite with Hattie but learns that she has left Albert Square. After an ill-fated attempt to win her back, Steve resigns himself to the fact that she is gone. Grant Mitchell gives him a job as a barman in The Queen Victoria public house and Steve falls for new arrival, Della Alexander. Della moves to the square to open a hair salon and coaxes Steve into becoming a partner in the business, named 'Kool for Kutz'. After some problems at home, Della moves into the Queen Vic with Steve and he starts seeing her as more than just a business partner. He actively pursues her but is shocked to discover that she is a lesbian when he catches her in bed with her girlfriend, Binnie Roberts. Steve throws Della out in disgust, prompting a feud between him and Binnie.

In 1995, Steve buys shares in the Bridge Street cafe and opens a night bistro, sparking a feud between him and Ian as Ian sees him as competition and tries to get him closed down. Later in the year, Steve is approached by a criminal firm who talk him into holding an illegal gambling night in his cafe. Several Walford residents attend, including Mark Fowler, who gets lucky and wins a sizable sum. Mark promptly gives his winnings to his father, Arthur, to repay a loan but Arthur is later falsely accused of embezzlement, and he is assumed guilty due, in part, to the money Mark gave him. Steve is faced with a dilemma when asked by his friend, Mark, to testify as a character witness for his father and corroborate Arthur's story about the origins of the money. Admitting to the illegal gambling will threaten Steve's trading licence and implicate the criminal firm who use stolen money to fund the gambling. When the firm find out that Steve is going to testify and implicate them, they try to dissuade him. After idle threats fail, they take a different approach and kidnap Steve's girlfriend, Lydia instead. Steve is frantic but he eventually finds her distraught after the mobsters had attempted to drown her. They threaten to kill Lydia if Steve testifies. Fearful for their lives, Steve packs his things and he and Lydia leave Walford in February 1996. 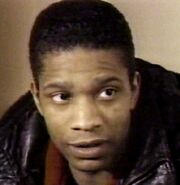 Steve Elliot - Name Card
Add a photo to this gallery
Retrieved from "https://eastenders.fandom.com/wiki/Steve_Elliot?oldid=147934"
Community content is available under CC-BY-SA unless otherwise noted.