Reginald William Carter
Stanley "Stan" Reginald Carter is the steel at the heart of the Carter family.

Stanley Reginald Carter is Canning Town born and bred, born there in 1937. His grandfather Reginald William Carter was in WW1. In the early to mid 1950's Stan was called up for National Service. When Stan was fighting in Malaysia during National Service he used to bury the bodies of his fellow soldiers. Stan Carter left the army by 1961 and met Sylvie Smith in Soho and they married in 1962. He likes telling anyone who’ll listen that he learnt everything he knows at the school of hard knocks; life is tough and a man gets on with it. Stan is an arch manipulator, he’ll lie and cheat to get what he wants, taking down anyone who stands in his way. And although he might be wary of Shirley and Mick, he knows where their weak spots lie and will do anything he can to get them back under his control...

When Mick visits Stan with Tina and Shirley he is in desperate need of money. Shirley stays in the car, which Stan notices. He says that they can have the money if Shirley comes up to the flat. The two of them talk about when Mick and Tina went into care. Stan gives Shirley Deano’s mobile number, saying that he is now going by the name of Dean. Several weeks later, Shirley is informed by her aunt Babe Smith that Dean has been staying with Stan. Shirley visits him, demanding to see Dean. Stan tells her that Dean left a few days before her visit but when she is gone, it is revealed that he lied and Dean is still staying with him.

A few weeks later, Mick receives news that Stan has been involved in an accident and broken his ankle. Mick visits him in hospital and Tina brings him to the pub, where they agree to stick it out for three weeks. After Mick's wife Linda Carter forbids Stan to smoke in the house, he secretly smokes out of the window whilst the family is out, accidentally causing a small fire when the cigarette is not stubbed out properly. He is rescued by his great-grandson Lee Carter who the rest of the family believed was still serving in Afghanistan. It is revealed Lee has been staying with Stan for a week. After Mick believes Stan has been wetting the bed, a furious Stan demands to be taken back home. Whilst there, he is visited by Dean, who is in trouble with the law for handling stolen goods. When the police arrive, Stan takes the blame and is arrested. Mick later collects him and returns him to Walford.

Stan later flirts with Cora Cross, and offers her a loan when he learns that she is struggling for money. When Nancy suffers an epileptic fit, Stan and Shirley unite to help her and successfully deal with the issue. Wanting to reconcile with Shirley further, Stan calls Dean to The Vic, under the pretence that Shirley will not be there. However, the reunion does not go well and Mick ends up punching Dean when he turns nasty with Shirley. Shirley blames Stan for the situation and threatens to throw him out, but he tells her if she does that he will reveal that it was her, not Shirley's mother Sylvie, that tried to drown Mick when he was very young. When the Carters decide to re-paint the exterior of The Vic, Tina tells Mick that she can remember when they were decorating and when Mick nearly drowned in a bath, and that their mother Sylvie was not present. Mick believes that Stan was the culprit who tried to drown him, and orders him to leave The Vic immediately. When Stan takes a long time packing, Mick violently grabs him and tries to drown him in the bath, although Shirley storms in a reveals that it was her who tried to drown Mick, and not Stan.

Build up to Stan's death

In April 2015, Stan was admitted to Hospital because he couldn't feel his legs, Tina was the first to react and phoned an ambulance, Stan met another patient called Cyril Bishop who came across to annoy Stan until he died while Cora and Babe were 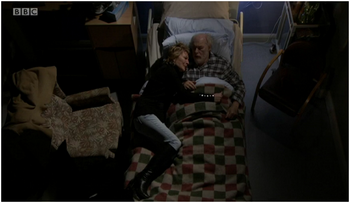 arguing over him. Stan later comes home but the following day his health deteriorates a lot which then made him go back to hospital and, then to a hospice. While he was there on the 9th April he was supposed to get married to Cora with all their friends and family gathered round, but the wedding was delayed because Stan was in immense pain. The following day (10 March) Shirley wakes up next to her father. Then Mick and Tina turn up, while Stan suffers extreme pain once again. Tina and Cora went home as Mick and Shirley were holding Stan's hand talking about how much they miss one another. But when Mick spoke about Stan being his dad, Shirley told him that "he ain't your dad he's mine", which resulted in Mick going back home. Later, as Stan and Shirley are talking, he passed away looking at her with his eyes open. She then gently put her hand over his face and closed his eyes, climbed onto his bed and laid next to him.

In September 2015, Stan ashes were poured into a dug trench on Ramsgate beach and the tide took him back out to sea.

Stan in The Vic 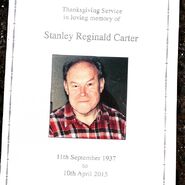