An A-Z Tour of Albert Square

Slaters in Detention is a 2003 DVD only spin-off comedic episode of EastEnders starring the Slater family. It was written by Tony Jordan, who helped devise the characters.

It begins with the female members of the Slater family dressed up in school uniform for a local disco, and they end up in a police cell where they reflect on the events of their lives, such as Kat revealing that Zoe was her daughter and Little Mo's marriage to Trevor Morgan. It also includes outtakes and an alternative ending to Little Mo's trial. 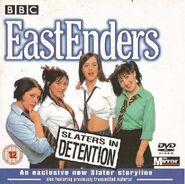 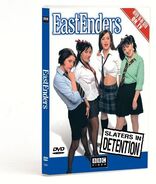 Slaters in Detention DVD
Add a photo to this gallery
Retrieved from "https://eastenders.fandom.com/wiki/Slaters_in_Detention?oldid=141856"
Community content is available under CC-BY-SA unless otherwise noted.