Tiffany Butcher
Simon "Wicksy" Wicks is the son of Pat Evans and Brian Wicks, brother of David and father of Steven.

Simon Wicks was born on 7 July 1965 in Walford to Pat Beale, who was still married to Pete Beale at the time of Simon's birth but she was seeing 3 other men at the same time, Kenny Beale, Brian Wicks and Den Watts.

Pat was never 100% sure who Simon's father was but by working out the dates, she was 99% sure it was Brian. In 1966, when Simon was 1, Pete and Pat broke up and she then married her lover Brian Wicks, who adopted Simon and his older brother David Wicks. Pete was the father of Pat's eldest son David but was probably not the father of Simon. When Pete and Pat broke up, Pete still believed he was Simon's blood father and was not to know the possibility that he was not until years later.

Simon arrives in Walford to see the man he believes to be his father, Pete Beale. They have not seen each other for 10 years and Pete is pleased to see him. He quickly gets a job in The Queen Victoria public house and moves in. It is soon revealed that Simon had been in a band with Eddie Hunter but Simon has borrowed money from loan sharks to keep the band afloat, but the band has fallen apart with Simon owing the loan sharks £1,500, which he cannot pay, and he has fled home after stealing from his mother, Pat Wicks. Pete pays off Simon's debt.

Simon attempts to form another band, but rivalry between the members prompts him to quit and go solo. He does not get very far however, and by the end of the year he gives up his dream of becoming a musician. Instead, Simon finds work as a barman in both The Queen Vic and later The Dagmar wine bar, where he frequently plays the pub piano, singing Cockney favourites to the regulars

Pat arrives in Walford, much to Pete's dismay, and tells Pete that he is not Simon's father. Pat had various affairs during their marriage, including one with Pete's brother Kenny Beale. This causes a rift between Simon and his mother, a relationship already damaged due to Simon's disapproval of her nonchalant style of parenting. Pat later admits that Simon's father is Brian Wicks, his supposed adoptive father. Simon visits Brian following this revelation, but his father is abusive towards him and so Simon cuts contact.

Simon proves popular with women. He has flings with Donna Ludlow, Mary Smith and Naima Jeffery, among others. In 1987, he dates Sharon Watts, but soon gets bored when she refuses to sleep with him. His first serious relationship is with caterer Magda Czajkowski. They move in together, but both want different things out of the relationship and Simon eventually jilts her in 1988 on the advice of his boss Den Watts, whose womanising he idolises.

In 1988, Simon has flings with Donna and Cindy Williams at the same time. Cindy refuses to tolerate Simon's womanising and when Ian Beale starts wooing her, she dates him instead. Initially, Cindy is only interested in making Simon jealous, but when she realises Ian is a budding entrepreneur, she agrees to marry him. Confused by Cindy, Simon reignites a relationship with Sharon. Jealous that Simon is moving on, Cindy seduces him and they have sex on the floor of The Queen Vic after closing time. This tryst culminates in Cindy falling pregnant with Simon's child. When Simon learns of the pregnancy, he refuses to have anything more to do with Cindy. Rejected, Cindy marries Ian and deceives him into thinking that her baby is his. She gives birth to Steven on Boxing Day 1989.

Meanwhile, Simon and Sharon's relationship continues. Sharon makes plans to buy The Queen Vic and run it with Simon. However, Simon finds this commitment daunting; he starts pining for Cindy and develops paternal feelings towards his son. Simon and Cindy resume their affair and when Ian finds out, he becomes obsessed with breaking them up and ruining Simon's life. Simon is accused of theft from The Queen Vic when marked notes are found in his pocket; however, it is Ian who planted them. When Simon loses his job he accepts Ian's offer of employment at his catering company, where Ian attempts to frame him for theft. When this fails, Ian tries to kill Simon by sabotaging the brakes of the van he is driving on Christmas Day 1990. Realising that Ian will not stop the feud, Simon, Cindy and Steven leave Walford to start a new life together the following day.

In 1992, Cindy returns and reunites with Ian, stating Simon abandoned her and Steven to move abroad. Simon eventually settles in New Zealand and in 2002, Steven, who has so far been brought up by Ian, discovers his true paternity and moves to New Zealand to be with Simon. Steven returns to Walford in 2007 when Simon reacts badly to his bisexuality. Simon's girlfriend Miriam becomes pregnant in 2009, but their relationship suffers in 2011 when Simon reveals to Pat that while staying with him, his brother, David Wicks, had an affair with Miriam. When Pat dies of pancreatic cancer in January 2012, David claims Simon is unable to get a flight to attend her funeral; however, Simon later arrives at his mother's graveside, alone, laying flowers and saying goodbye. In 2014, Peter Beale reveals that Steven is living in New Zealand with Simon after he plans to escape Walford after the murder of Lucy Beale. The following year, Peter goes to visit Steven and Simon in New Zealand. 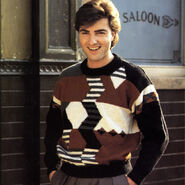 Simon Wicks - Name Card
Add a photo to this gallery

Retrieved from "https://eastenders.fandom.com/wiki/Simon_Wicks?oldid=191543"
Community content is available under CC-BY-SA unless otherwise noted.