Martina Quinn
Shenice Quinn first appeared on 28 February 2011. She is the young daughter of Kat Moon's friend Martina Quinn whom they met in Spain.

Shenice is the daughter of Martina Quinn, who it is an old friend of Kat Moon's from Spain. Martina reported Kat and her husband Alfie Moon to the police in Spain, leading to some animosity between Kat and Martina. Martina and Shenice arrive at The Queen Victoria, and Kat immediately throws water over Martina. However, she reveals that her bar was smashed up by the police and she was worried that she would lose Shenice if she did not tell the truth. Alfie bonds with Shenice, and Martina tells Kat that she has lost her bar and has nothing left, so Kat allows her them to stay. After a night out with Kat, Martina spends the day in bed. Kat later finds Shenice wearing her clothes and makeup. Kat shouts at Shenice to take the clothes off, and Shenice flinches thinking Kat is going to hit her. The next day, Shenice is caught trying to steal cigarettes from the local shop, which Kat chastises a drunken Martina for. Martina calls her daughter useless before going to bed, and Shenice tells Kat and Alfie that Martina says things she does not mean when she is drunk. The next day, Martina tells Kat that she will get some money so she and Shenice can move out and that she is back with her boyfriend. Kat and Alfie organise a birthday party for Shenice as Martina has forgotten and Shenice takes a disliking to Tiffany Butcher as they are wearing the same outfit. Shenice has to leave halfway through the party as Martina finds a place to live, and they move out, leaving Alfie and Kat distraught.

Kat and Alfie holiday in Spain and return with Shenice. Shenice and Tiffany become friends but Shenice becomes bored as Kat cannot take her and Tiffany out anywhere because of Kat's baby Tommy. Shenice bonds with Kat's relative Jean Slater after helping her plant some window boxes. When Shenice is due to go back to Spain, she begs to stay in Walford and Alfie agrees. Shenice is then enrolled at Walford Primary School. Martina allows Shenice to spend Christmas 2011 with Kat and Alfie. When Jean is questioned for benefit fraud, it sparks off another bipolar episode. This results in Jean believing that Shenice is an angel sent from her daughter Stacey Slater. Jean tries to take Shenice ice skating whilst dressed in pyjamas. Shenice manages to escape and runs back to The Queen Victoria to alert Kat and Alfie. Jean's mental health improves, and though Shenice is wary of her for a time, she allows Jean to become her honorary grandma. Shenice goes to visit Martina in Spain, and on 7 September 2012 Kat reveals to Alfie that she is not coming back. 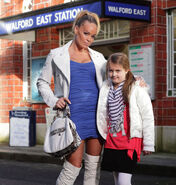 Add a photo to this gallery
Retrieved from "https://eastenders.fandom.com/wiki/Shenice_Quinn?oldid=188682"
Community content is available under CC-BY-SA unless otherwise noted.