Former; regular
Shelley Lewis made her first appearance on 10 November 1992. She is portrayed by Nicole Arumugam.

Shelley is a college friend of Michelle Fowler, and is first seen in November 1992. When Michelle's housemate, Rachel Kominski, leaves Walford early in 1993, Shelley moves in with Michelle and her daughter Vicki Fowler at 55 Victoria Road. She later gets a job as a part-time barmaid in The Queen Victoria public house, and is often seen hanging around with her other student pals Rich and Clem (her on/off boyfriend), which causes problems with Michelle when are were caught smoking cannabis in front of Vicki.

Shelley initially sets her sights on Michelle's brother, Mark Fowler. Both appeared smitten with each other, but Mark is harbouring a secret - he is HIV positive. Seeing them growing closer, Michelle tells Mark that he has to cool things with Shelley or tell her the truth. Mark then decides that it is best that they just remain friends.

Shelley is a bit of a user and after her brief fling with Mark ends she set her sights on local sleaze, Richard Cole, thinking he'd be a good 'meal ticket'. Richard is happy to lavish Shelley with expensive gifts in the hope that they will coax her into having sex with him. Shelley is happy to take the gifts, but when Richard begins to seek a return from his investments, Shelley abruptly tells him that she 'wouldn't touch him with a bargepole'.

Shelley is still attracted to Mark and later initiates a kiss, reigniting their romance. In November that year, they (along with Michelle and Clem) go on a trip to Amsterdam. Shelley is still dating Clem, so she and Mark sneak away to be together at any opportunity. They eventually manage to give Clem and Michelle the slip and end up back at their hotel. Shelley makes her amorous intentions clear, but Mark seems hesitant and ends up walking out. A confused Shelley follows him and berates him for leading her on. Mark is finally forced to divulge that the reason he cannot have sex with her was because he is HIV positive. Shelley is furious with him for not trusting her enough to tell her in the first place and tells him she never wants to see him again.

Mark takes the rejection badly and he begins neglecting his health by not taking his HIV medication. During Christmas that year, he is rushed to hospital after collapsing. When Shelley finds out that Mark is ill, she rushes to him and confesses that she really cares for him and so they reignite their relationship. Shelley is desperate for Mark to meet her family and go on holiday with her parents. She becomes slightly infatuated with him and tries to spend as much time with him as she can. Mark feels that the relationship is moving too quickly and soon begins to tire of Shelley.

By March 1994, Mark decides to end the relationship but when he tries to break it off, Shelley resorts to emotional blackmail and says that if he left her, she would fail her exams. When this doesn't work, she resorts to begging, crying and emotional pressure, saying that she has risked her health being with him, so he owes her. After one final irrational outburst — where she almost publicly reveals that Mark is HIV positive — Shelley finally realises that the relationship is over and decides to leave Walford in March 1994.

Shelley makes one final appearance in December 1994, when she and Michelle attend their university graduation ceremony. Shelley is there with her fiancé, and has found herself a job with a publisher who plays golf with her fiancé's father. Shelley sees Mark and all their past animosity has been forgotten, although Mark's new girlfriend, Ruth Aitken, is a little jealous of her. 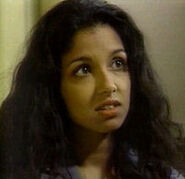 Shelley Lewis
Add a photo to this gallery
Retrieved from "https://eastenders.fandom.com/wiki/Shelley_Lewis?oldid=150510"
Community content is available under CC-BY-SA unless otherwise noted.