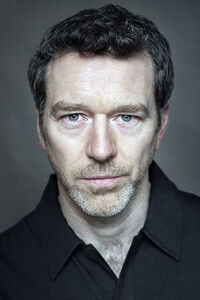 Seán Gleeson is an English actor and director who played Conor Flaherty in EastEnders from 1997 to 1999.

Seán was born on the 6th April 1965 in London. He is best known for his role as Conor and Ronnie Woodson in Doctors - a part in which he remained in for six years. His first TV debut was in 1996 in the television series Pie in the Sky where he portrayed Luke Kelly. He then went onto appear in two more television series', The Bill and Underworld and landing a part in a movie The Woman in White in a minor role, before landing his role in EastEnders.

After leaving EastEnders, Gleeson has appeared in various television programmes such as Holby City, Casualty and Midsomer Murders. His last known contribution to television was in 2018 series No Sherbert in which he played a character called James.

He has also taken a shine to direct, and has directed 48 episodes of Doctors, 11 episodes of Casualty and 1 episode of River City.

Retrieved from "https://eastenders.fandom.com/wiki/Se%C3%A1n_Gleeson?oldid=149718"
Community content is available under CC-BY-SA unless otherwise noted.