Tony (divorced)
Sarah Cairns is a deranged psychopath stalker who is mentally unstable and tried to destroy Martin & Sonia Fowler's marriage. Sarah made her first appearance on the 3 September 2004 and she last appeared on 22 October 2004.

Sarah has been in two very unlucky previous relationships, once many years ago Sarah got engaged to a man at a Christmas Party at one of the job's she was temping at, as they both had a very drunken night together, but unfortunately he legged it, and also did a runner at the last minute, with Sarah never seeing or hearing from him again, as she believed, he was on the rebound, and Sarah ended up keeping the engagement ring.

Sarah later moved on, and met a man called Tony, and they ended up getting married, but there marriage didn't last as it turned out that Tony was cheating on Sarah with another woman, as Sarah came home from work one night she found her, she found them both in bed together, which lead to Sarah & Tony splitting up and getting divorced.

Sarah believed that she was a victim of a sexual assault, as she claims that men always kept checking her out, sizing her up and looking to pull her as she was working on her shifts as a barmaid, which triggered Sarah to become mentally unstable.

Sarah is a barmaid who worked in Angie's Den nightclub. In September 2004 Martin Fowler and his friends go out one evening to and pretend to have a stag party in Angie's Den order to get some free drinks. Martin gets very drunk and ends up flirting with Sarah. The next morning, Martin wakes up in Sarah's bed at her flat all the way in Wimbledon and realises that he slept with her. Martin admits to Sarah that he has made a big mistake and tells her that he is married man and Sarah seems to back off.

However just very soon after Sarah met Martin, it becomes clear to Martin that she is mentally unstable, as she begins to stalk Martin and sending him text messages declaring her love for him. Sarah later runs out in front of a van knowing that Martin's wife Sonia Fowler will see her. Sonia is a nurse and takes Sarah into Pauline's house so she would look after her and the two become good friends. Sarah convinces herself that Martin really loves her and that he'll leave Sonia to be with her.

Martin keeps the truth about Sarah hidden from Sonia but Sarah tells his family she is dating a "certain" married man.

The truth is finally discovered

In October 2004 Martin ends up finding the pressure intolerable and he reports Sarah to the police, but they don't take any notice. Sarah admits to Martin's mother, Pauline Fowler that it's her son Martin who she has been seeing and Pauline sends her packing and tells Sarah to leave. While Martin is out, Pauline falls off a stepladder and Sarah disappears. Martin tracks her down and threatens her until she confesses that she did push Pauline off the ladder. He tells Sarah he will kill her if she ever shows her face again and tells her to stay away from him and his family. Sarah calls the police on Martin and he ends up being arrested and spends most of the day down in the police station. During this time Sarah goes round to the Fowlers house and tells Sonia of Martin's deceit. When Martin arrives home, he apologises to Sonia, promises it meant nothing to him and tells Sonia that he didn't mean to lie to her and Sarah is nothing compared to her.

Sarah then goes mad and refuses to leave the house says to Sonia that it's her he love and and that he has no choice. At this time, she holds a knife in her hand, threatening to stab Sonia if Martin doesn't leave to be with her.

Sarah tells Sonia that Martin was the one because he never touched or tried her and admits that he passed out drunk, slept in her bed and didn't have sex with her. Sarah realised that she could never be with Martin so she lashed out with the knife in hand and tries to stab Sonia, but Martin gets in the way and she ends up stabbing him instead. This then lead to a cat fight between Sarah and Sonia and Sonia picks up Pauline's Fruit bowl, bashes Sarah the head with it and falls unconscious. Jim walks into the house and finds Sarah unconscious and Sonia tells him to phone for an ambulance. Sonia tells Martin that Sarah is still breathing and everything is going to be ok and she can't hurt them anymore.

Sarah exited the series then was later committed to a mental institution and she has never been seen her heard from ever since. 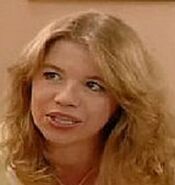 Retrieved from "https://eastenders.fandom.com/wiki/Sarah_Cairns?oldid=150772"
Community content is available under CC-BY-SA unless otherwise noted.