Aunt Sal; Peggy Mitchell's Sister. She first appeared in 1996, for Peggy's Birthday. In 2002 she returned for her Great Niece's naming Party, in 2004 returned for Niece, Sam's, wedding to Andy Hunter, her final memorial appearance was in 2007, for Nephew, Phil's, Wedding to Stella Crawford. She still pops up in the Square on numerous occasions, when big things happen, such as weddings. Sal has a son by her husband Harold, that son is the cousin of Phil and Grant. 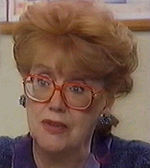 Sal Martin and Peggy Mitchell
Add a photo to this gallery
Retrieved from "https://eastenders.fandom.com/wiki/Sal_Martin?oldid=190153"
Community content is available under CC-BY-SA unless otherwise noted.