Saeed the original owner of the First til Last Grocery Store. He is never truly accepted in Walford, and his arranged marriage ends in divorce after it is discovered that he'd been making obscene phone calls to women. He leaves Walford in disgrace, leaving his business to his wife.

London-born Saeed claims to be a Cockney but is looked upon as Asian by everyone in Walford. Inexperienced and naive, he took over the family business (the corner shop at 71 Bridge Street) when his parents retired to their native Bangladesh. Saeed had a brother. Although his father was well liked in the community, Saeed is seen as an outsider, particularly by Lou Beale, who regularly comments that he doesn't belong or know how to take care of his customers.

Saeed is unhappy in his arranged marriage to his unwilling wife, Naima, who shares a flat with him at 47B Albert Square. Naima doesn't like Saeed much and spends most of her time trying to undermine him; rebelling against the customs that her parents forced her to live by. Naima refuses to share her husband's bed and Saeed starts visiting prostitutes and later the strip-club where Mary Smith works.

After continual pressure, Naima relents and finally consummates her marriage to Saeed, improving things between the couple, but their marital bliss is short-lived. Naima receives an anonymous letter from Dot Cotton, who has discovered Saeed's sordid exploits. Dot feels it is her Christian duty to inform Saeed's wife, and when Naima confronts Saeed, he does not deny it so she leaves him.

A few months later, Saeed is discovered making secret obscene phone calls to Naima's friend, Debbie Wilkins. When Naima learns of this, she files for divorce. Feeling humiliated and alone, Saeed takes his parents' advice and moves to Bangladesh, where he allegedly remarries and lives happily with his new wife and their seven children. It is also mentioned that Saeed works as a translator for the government in Dhaka. His last appearance is on 26 December 1985 where his final scene is an emotional farewell with Lou Beale before departing off in a taxi. After Saeed's departure, Naima remains in Walford and runs the shop on her own until 1987, when she re-marries and also returns to Bangladesh. 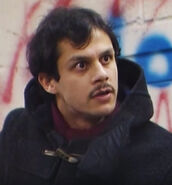 Saeed Jeffery (Promo)
Add a photo to this gallery
Retrieved from "https://eastenders.fandom.com/wiki/Saeed_Jeffery?oldid=164319"
Community content is available under CC-BY-SA unless otherwise noted.