The gym at 9 Turpin Road was previously owned by Jack Branning and Michael Moon, the gym was named Basher Jim's, named after Jack's father, Jim Branning who was a boxer and nicknamed Basher Branning.

It wasn't until Jack left the square, Janine Butcher bought his share. When Michael was murdered, Janine sold the gym when she was put in prison.

The gym was then bought by Ronnie Mitchell, to show the residents of Walford that she wasn't going anywhere, she renamed the gym to Ronnie's.

Max and Jack
Add a photo to this gallery 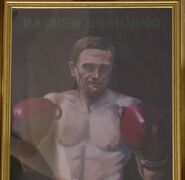 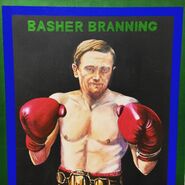 From EastEnders Instagram.
Add a photo to this gallery

Boxing Club during Flashback Episode
Add a photo to this gallery
Retrieved from "https://eastenders.fandom.com/wiki/Ronnie%27s_Boxing_Club_%26_Gym?oldid=82284"
Community content is available under CC-BY-SA unless otherwise noted.