Ran over by a lorry while chasing a cat

Roly was the pet poodle of Sharon Watts who lived with her and Den and Angie at The Queen Victoria. He appeared in the show from 1985 to 1993.

Roly was a dog given to Sharon Watts by her adoptive father Den. He was disliked by Angie, who claimed he kept trying to make her fall over. However, following Den and Angie's divorce, Sharon was horrified to discover that Den was considering selling Roly, and stormed to The Queen Vic, where she demanded that Roly should be given to her.

Involved in many storylines, Roly was the one who alerted viewers of the fact that Den had gotten 16 year old school girl Michelle Fowler pregnant. Michelle went to visit the father of her baby at a nearby canal, and Roly jumped out of the then unknown mans car, revealing the mystery man as Den. Also a bit of a rogue, Roly trampled over Tom Clements' prize leaks, bit Alan Mclntyre on the bottom, and tore apart Ethel Skinner's knitted Christening gown she had been planning to give to the Fowlers.

When Pat Wicks was savaged by the Walford ripper, Roly was the first to find her in the Albert Square gardens. However, when the Butchers moved into The Vic in 1988, Pat demanded that Roly was to be kicked from out from the pub, causing him to run away. Luckily, Roly was found by Junior Roberts who returned him to the Butchers, where Diane and Ricky Butcher changed Pat's mind. Mo, who initially suggested buying him a kennel, then warmed up to him and took him to live in her flat for a while.

When Eddie Royle became the new landlord of The Vic in 1990, Roly returned to live with him and Sharon Watts, his previous owner, when Sharon lodges there as a barmaid. It was whilst out walking Roly that Eddie was stabbed and left to die in the middle of the Square, and his body was only found after Roly began barking. Roly then finally continued to live with Sharon and her husband Grant Mitchell.

Roly was nearly killed when Grant Mitchell set fire to the Vic for the insurance money, and died on screen when he was run over while chasing a cat in 1993. Roly’s real-life owner was EastEnders creator Julia Smith. He died in real life in 1995.

Roly was an apricot coloured Standard poodle who was on the first episode of EastEnders and remained in the programme until the 19 October 1993, when the real Roly was getting too old to appear on screen regularly. According to Mandy Salter, who was paid £10 to walk Roly, he slipped his lead to pursue a cat and was run over by a lorry.

Roly at the Election Polling Station (1987) 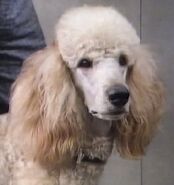 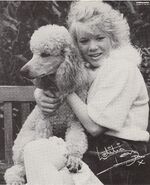 Sharon Watts,Angie Watts, Den Watts and Roly (5 April 1991)
Add a photo to this gallery
Retrieved from "https://eastenders.fandom.com/wiki/Roly?oldid=207777"
Community content is available under CC-BY-SA unless otherwise noted.