In late 2009 while in a relationship with Ricky Butcher, Sam had an affair with Jack Branning before being arrested and sent to prison for her role in the death of Dirty Den. It was during this time frame when he was conceived.

Sometime later, Sam discovered she was pregnant but did not tell anyone except for close friend Minty Peterson.

In late August, Sam's mother Peggy Mitchell visited Sam in prison and it was not until the end of the visit until Peggy realised Sam was pregnant. Sam still angry that her mother tried to frame her for Archie Mitchell's murder insisted that she did not want to see Peggy but after being rushed to hospital Peggy ignored Sam's demands and rushed to the hospital and it is during an argument between them when Sam goes into labour. Despite insisting that Ricky is the father of her baby both potential fathers Ricky and Jack and their partners Bianca and Ronnie go to the hospital.

After the baby boy is born, Sam announces that she is putting him up for adoption. Despite her mothers and Ricky's desperate pleas she continues to insist that it is the right thing to do even after an attempted intervention by Ronnie and Roxy Mitchell. It is only when Peggy points out that Ricky would never forgive her if she gave up his baby that she changes his mind and returns home to the Vic with Peggy and the baby.

Despite insisting that the baby is Ricky's and even naming him "Richard" after him, Jack, Ricky, Bianca and Ronnie still insist on a DNA test. It is carried out and Sam receives a phone call with the results which she claims confirmed Ricky was the father however a suspicious Bianca contacts the DNA testing clinic and is shocked to discover that Sam lied and Jack is the father of the baby. After confronting her about it publicly Sam admits she lied because Ronnie persuaded her too. Jack and Sam later agree to change the baby's name from Mitchell to Branning.

A short while later after a tragic fire in the Queen Vic, Ricky's grandmother Peggy leaves Albert Square leaving Sam feeling alone and vulnerable. After a mishap where Sam mistakes the colour of baby feces for a serious illness, Sam realises how inexperienced she is and says she wants Ronnie and Jack to have the baby but when she is supposed to drop the baby off she does not turn up. Ronnie goes to Sam's and tries to persuade her not to give Ricky up saying that it will be the biggest mistake of her life. She offers Sam money to run away and take Ricky but later on Sam gives Jack the baby. Ronnie gives Sam the money and she takes the money and Ricky home. After the breakdown of her relationship with Minty, she leaves with Ricky and goes to Portugal to live with her brother Grant and she changes Ricky's surname back to Mitchell.

Ricky was mentioned a few months later when Phil Mitchell and Shirley Carter visited Grant, Sam and Ricky in Portugal. Jack mentioned that Shirley had some photos of Ricky to show him and Ronnie asked him did he miss Ricky and Jack claimed that he didn't and that Ricky was happy and had a new family now.

Later Sam returns and leaves Ricky with Jack after finding it hard to cope. He just wants to be eat junk food and play video games, it was obvious that Sam gave her son no attention at all. He gets on well with his sister Amy Mitchell after Amy shows Ricky her hamster (that he keeps calling a rat) but soon Jack and Ronnie get him out of his shell . He did go to Beavers, but stopped going after his step- mothers and Aunties death . 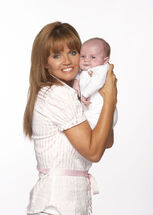 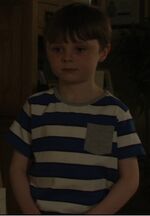 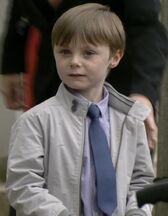 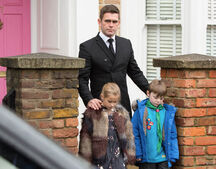 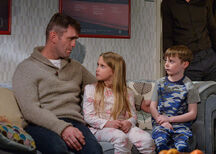 Retrieved from "https://eastenders.fandom.com/wiki/Ricky_Mitchell?oldid=207711"
Community content is available under CC-BY-SA unless otherwise noted.