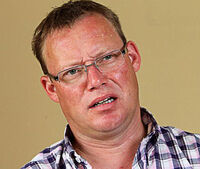 In 1997, Groves attended the Poor School studying acting, after two years he graduated in 1999. Before this, he had been a professional chef, achieving a stint at Raymond's Blanc's highly rated Le Manoir aux Quat' Saisons.

In 2006, Groves wedded his co-worker Hannah Waterman who appeared as Laura Beale on EastEnders, unfortunately the couple went their separate ways in 2010. In various interviews, Groves has stated that he enjoys fishing and playing golf and he is a supporter of Leyton Orient. Athletic Groves, has also competed in the London Marathon.

Groves' other television credits include London's Burning, Burnside, Life as We Know It, Crime Stories, The Smoke and his most recent role Going Forward in 2016.

Retrieved from "https://eastenders.fandom.com/wiki/Ricky_Groves?oldid=149483"
Community content is available under CC-BY-SA unless otherwise noted.