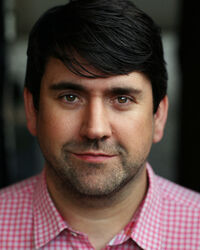 Richard Elis is a Welsh actor and producer who appeared as Huw Edwards in EastEnders from 1996 to 1999.

Elis was born in 1975 in Wales. He started to achieve his dreams of acting at the Welsh College of Music and Drama and graduated in 1996. His first acting job was playing Huw in EastEnders, however in 1997 while he was still in the soap he appeared in another television series A Mind to Kill appearing as a constable. Since leaving EastEnders in 1999, Elis has gone to appear in other productions such as The Bill, Gwaith/Cartref, 35 Diwrnod, Coronation Street and Doctors. In 2010, Richard found a passion for producing and co-produced his first production which was All Shook Up!, since that, he has gone to produce two more fully complete shows, and two more shows are currently under post-production.

Retrieved from "https://eastenders.fandom.com/wiki/Richard_Elis?oldid=149687"
Community content is available under CC-BY-SA unless otherwise noted.