Richard Cole arrives in Walford in 1992 as the new Walford market inspector. He is known as a corrupt man who will pull every trick in the book to make money and he is not well liked by the community. He is also a notorious womaniser who has various brief flings. He briefly dates market trader Rachel Kominski in 1992, but antagonises her later when he decides to give her permanent market pitch to his newly arrived friend, Sanjay Kapoor. In 1993, he has sex with 17-year-old Bianca Jackson, and when he dumps her shortly after, she and her friend Natalie vandalise his flat. Later, he has a longer-lasting romance with Kathy Beale, which sours when she discovers that he is taking a cash bribe and allowing a mobile hot dog van to trade in direct competition to her café. In March 1993, his old friend Sanjay Kapoor and his wife Gita Kapoor moved into Albert Square. Tricky once threatened Gita about their brief affair if she continued hating on him. Tricky then spread vicious rumours about Kathy, who was then seeing Phil Mitchell. He branded Kathy a slut and was dating a man who had one brain cell shared between him and his brother Grant. Phil frogmarched Tricky into the toilets and shook him about until Grant broke it up.

Richard makes various enemies, including Alan Jackson, who he reports for benefit fraud, Arthur Fowler, whom he causes to lose his job as market sweeper, and lovers Mandy Salter and Aidan Brosnan. Richard buys a property to let out for rent. Mandy and Aidan are squatting in one of the bedsits at the time and Richard evicts them, leaving Aidan homeless and suicidal over Christmas 1993. However, Richard's main rival is Kathy's son Ian Beale. Richard relishes winding up Ian by flirting with Ian's wife Cindy. Richard spreads rumours about having an affair with Cindy, implying that he is the father of Cindy's unborn twins, which causes various problems in the Beale marriage for a while. Richard even evicted Big Ron from his stall, and was forced to give it back.

In March 1994, Tricky grassed Frank Butcher up to the police who suspected he torched the car lot in an insurance scam. He said Frank had been virtually bankrupt recently. Phil and Grant Mitchell had a word with Tricky, saying round here you do not grass on mates. When Tricky started giving them gob, Grant got aggressive with him but was interrupted by Sharon. The Mitchells let Tricky off with a warning and Tricky left.

Later, Richard orchestrates the closure of Ian's catering business the "Meal Machine" by reporting him to environmental health. In July 1994, Phil hit rock bottom due to accidentally killing a vagrant in the car lot fire. Tricky again started spreading rumours that Phil was not satisfying Kathy enough, unlike what he did. One time Tricky insulted Kathy and when Ian intervened, Tricky hit him. Ian vowed revenge.

Ian returned to Walford and pretended he was into photography so asked Tricky to pose for a photo. Ian now had enough evidence to show Neil. Ian then gathered his friends and family around to show Tricky up in the market. Ian said to Tricky that he knows about his dodgy past with the council and stitching someone up. Tricky said he has never known a Neil Bradley and tried to deny any knowledge. Ian said he stitched someone up. Dick said "That was never proved", so he dropped himself in it. Ian then posted a letter to Neil Bradley when Dick was watching, Dick had to be restrained by Alan Jackson so he could not stop Ian posting the letter. He knew Neil was to be notified of his whereabouts and come after him. Dick called Ian a pillock and ran off towards Turpin Road.

Several hours later, that night, when there was an ABBA concert at The Queen Vic, Tricky visited Sanjay Kapoor to say he was going away. All the rents on his flats were up to date, and he said Sanjay could stay in the flat Tricky Dicky owns for the time being. Sanj asked for how long could he stay in Tricky's flat, and Tricky said until his solicitor sells it for him. Tricky then added that he has handed in his resignation as a market inspector. Sanjay then realised that Tricky was not coming back, and that Neil Bradley business could be why. Tricky said he only just realised how narrow minded people were around Walford and he will not miss the area. Tricky Dicky then got into his car and drove off into the night. 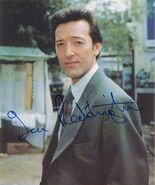 Richard Cole
Add a photo to this gallery
Retrieved from "https://eastenders.fandom.com/wiki/Richard_Cole?oldid=208377"
Community content is available under CC-BY-SA unless otherwise noted.